King Salman and Mr Afwerki discussed “bilateral relations and ways of enhancing them in all fields,” as well as the “latest developments” in the region.

Mr Afweki departed Jeddah on Monday evening. The Saudi Ministry of Foreign Affairs tweeted several pictures of the pair greeting one another ahead of their meeting. 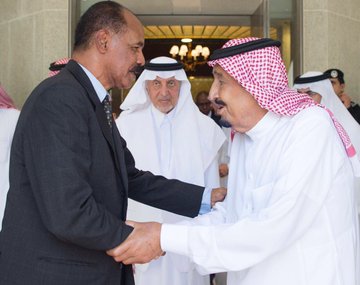 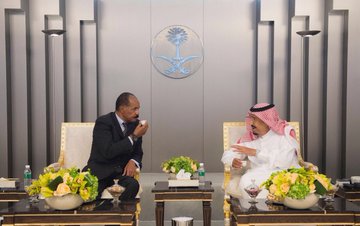 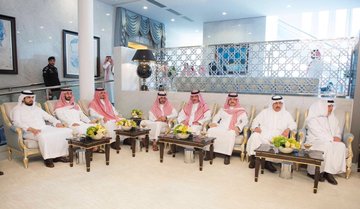 Last week, Eritrea appointed its first ambassador to neighbouring Ethiopia in two decades, the government said, as the former foes pushed on with a rapprochement.

Since signing an agreement in Asmara on July 9 to restore ties, Eritrean and Ethiopian leaders have moved swiftly to sweep away two decades of hostility since conflict erupted between the two neighbours in the Horn of Africa in 1998.

The rapprochement was triggered by the taking office in April of Ethiopian Prime Minister Abiy Ahmed, who announced he wanted to implement a peace deal that ended the war.

JEDDAH: Saudi Arabia’s King Salman has expressed his appreciation to scholars who took part in the International Ulema Conference on Peace and Security in Afghanistan in Makkah, saying the Kingdom was making efforts to “heal the divisions and differences among the Afghan people.”

Chairing the Cabinet session at Al-Salam Palace in Jeddah on Tuesday, the king said Saudi Arabia was working toward “unifying the ranks and words of Muslims worldwide.”
He briefed the Cabinet on the results of his recent talks with President Cyril Ramaphosa, of South Africa, on future cooperation between the two countries.
The Cabinet welcomed the final statement by the Makkah conference calling on states, organizations and Islamic elites to play positive roles in achieving security and peace in Afghanistan.
The forum urged all Afghan factions to halt the fighting and work toward “reconciliation between brothers, extinguishing the fire of sedition.”
Muslims worldwide should continue their “firm stand in front of the advocates of violence and extremism in defense of their religion and maintaining the unity of the Islamic world,” it said.
The Cabinet also reviewed a ministerial meeting of the Arab-Chinese Cooperation Forum in Beijing and welcomed a decision by Chinese leader President Xi Jinping to establish an Arab-Chinese strategic partnership.
China’s Belt and Road initiative will link the interests of China and Arab countries and “add to the prosperity and economic advancement of all,” it said.
The Cabinet denounced recent suicide attacks on two election gatherings in Pakistan and the city of Jalalabad in eastern Afghanistan, and offered condolences to families of the victims.
In the local arena, the Cabinet extended its appreciation to the king, based on a report by Crown Prince Mohammed bin Salman, for pardoning all troops who have taken part in the Saudi Renewal of Hope operation in Yemen of their military and disciplinary penalties for their heroism and sacrifices.
The Cabinet approved a license for the Iraqi Commercial Bank to open a branch in Saudi Arabia and authorized the Minister of Finance to decide on any subsequent requests to open other branches.

Addis Ababa, Dhu-AlQa’dah 05, 1439, July 18, 2018, SPA — King Salman Humanitarian Aid and Relief Centre (KSRelief) delivered here today 100 tons of dates as a gift given by the Kingdom of Saudi Arabia to the Republic of Ethiopia whereas the delivery ceremony was attended by the Saudi Ambassador to Ethiopia Abdullah Faleh Al-Arjani, representatives from Saudi Ministry of Finance and KSRelief team.
In a press statement, Al-Arjani said that this gift comes within the framework of support being provided by the government of the Kingdom of Saudi Arabia, led by the Custodian of the Two Holy Mosques King Salman bin Abdulaziz Al Saud and His Royal Highness the Crown Prince for a number of friendly and brotherly countries and the most needy families in different parts of the world.

This article was first published in SPA.GOV.SA

If you want more interesting news or videos of this website click on this link SPA.GOV.SA Home

JEDDAH: King Salman on Sunday approved the implementation of an electronic sick-leave system, and directed relevant authorities to coordinate with the Civil Service Ministry in case of any amendments to the terms for granting sick leave.
He also approved a program to train Saudi professionals in clinical coding. The Saudi Health Council and the Human Resources Development Fund (Hadaf) are cooperating to implement the training program, whose aim is to encourage the private health sector to hire the program’s graduates by leveraging the funding provided by Hadaf.
The training program aims to improve the quality of health care and control expenditure. The Health Ministry’s General Directorate of Licenses will establish an electronic network linked to the licensing system of the Clinical Coding Department at the National Center for Health Information.
The Council of Cooperative Health Insurance will work with the Saudi Health Council to develop controls and find ways to employ graduates at private health care institutions.
Clinical coding licenses and standards will be included in unified national standards for accreditation of health facilities.
This initiative is part of the Saudi Health Council’s efforts to contribute to achieving the Vision 2030 reform plan, whose objectives include the Saudization of certain professions that are vital for the national economy.

The Custodian of The Two Holy Mosques King Salman is an icon to many of us. His smile in photos is definitely one of his most recognisable features.

1. His Royal Highness during his younger years 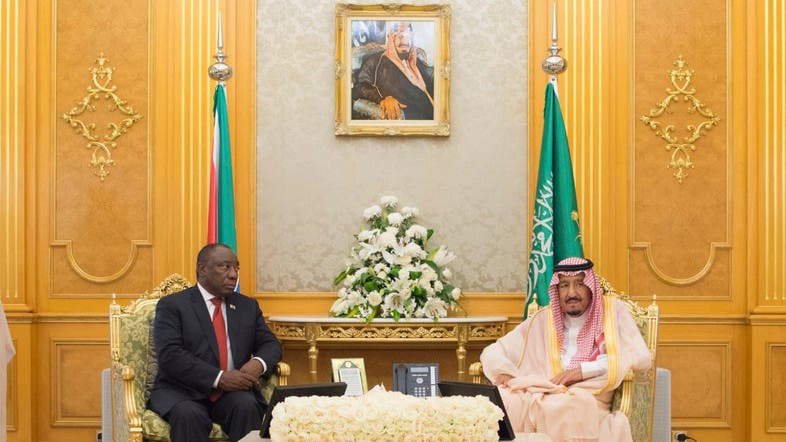 The President was also received by Prince Khalid Al-Faisal, Advisor to Saudi King and Governor of Makkah Region; and Crown Prince Mohammed bin Salman, Vice President of the Council of Ministers and Minister of Defense.

An official welcome ceremony, with the two national anthems performed, was held to honor the President of South Africa.

The Saudi monarch then escorted his guest to the main gallery at the Royal Court where the President shook hands with other princes, ministers and senior government officials who welcomed him.

This was followed by a luncheon given by the King in honor of the South African President and his accompanying delegation.

Talks were also held during which they discussed bilateral relations between the two countries and prospects of cooperation in various fields. The meeting also reviewed the regional and international files.

The reception and banquet are attended by a number of princes, ministers and senior officials. 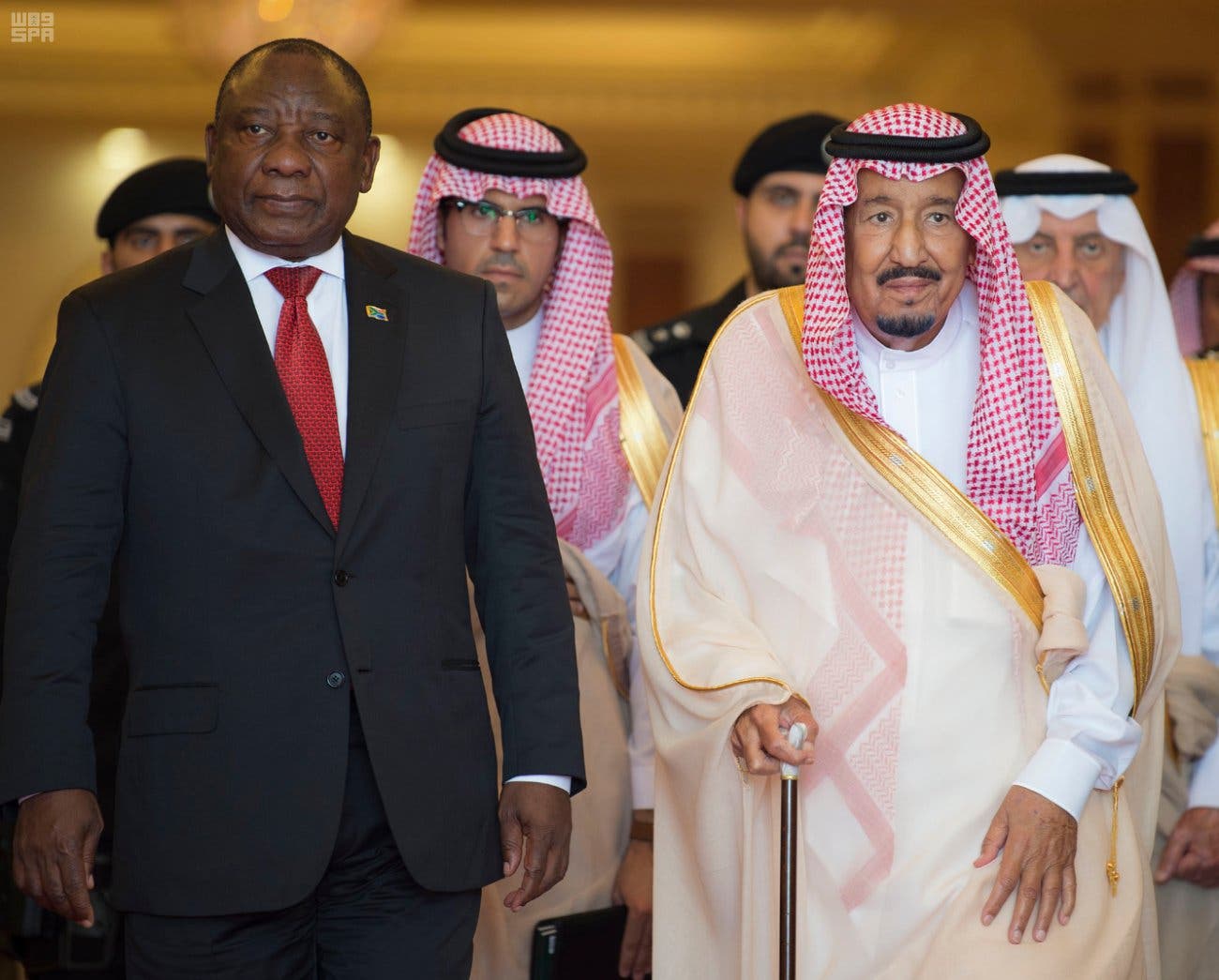 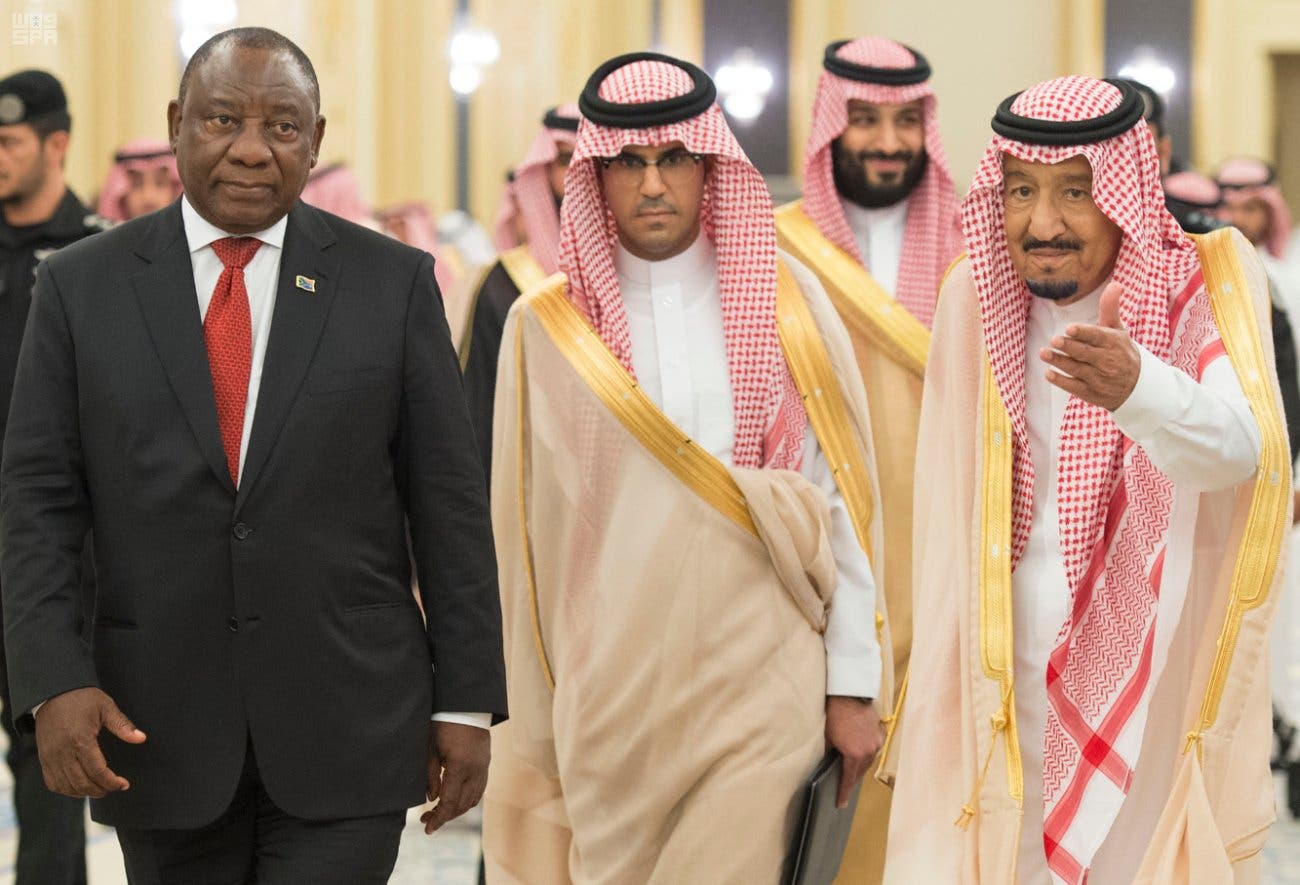 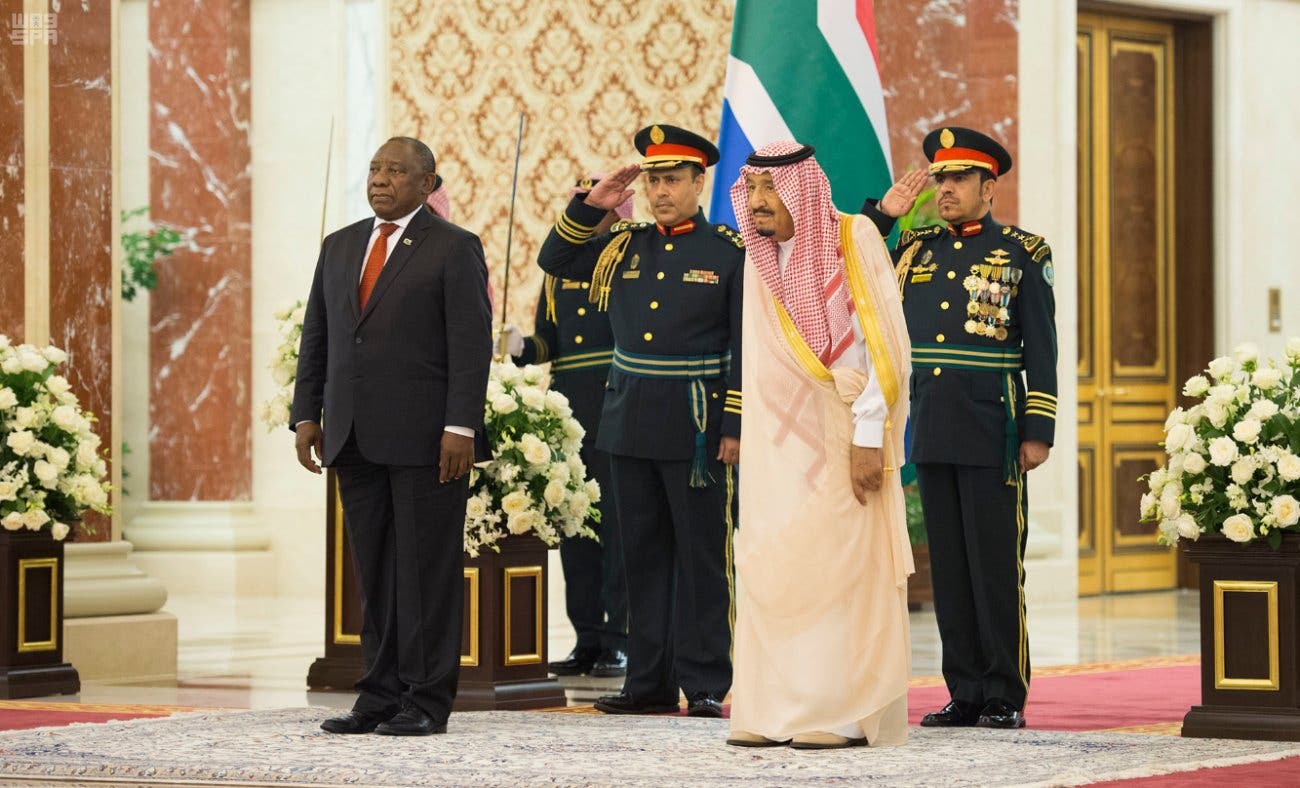 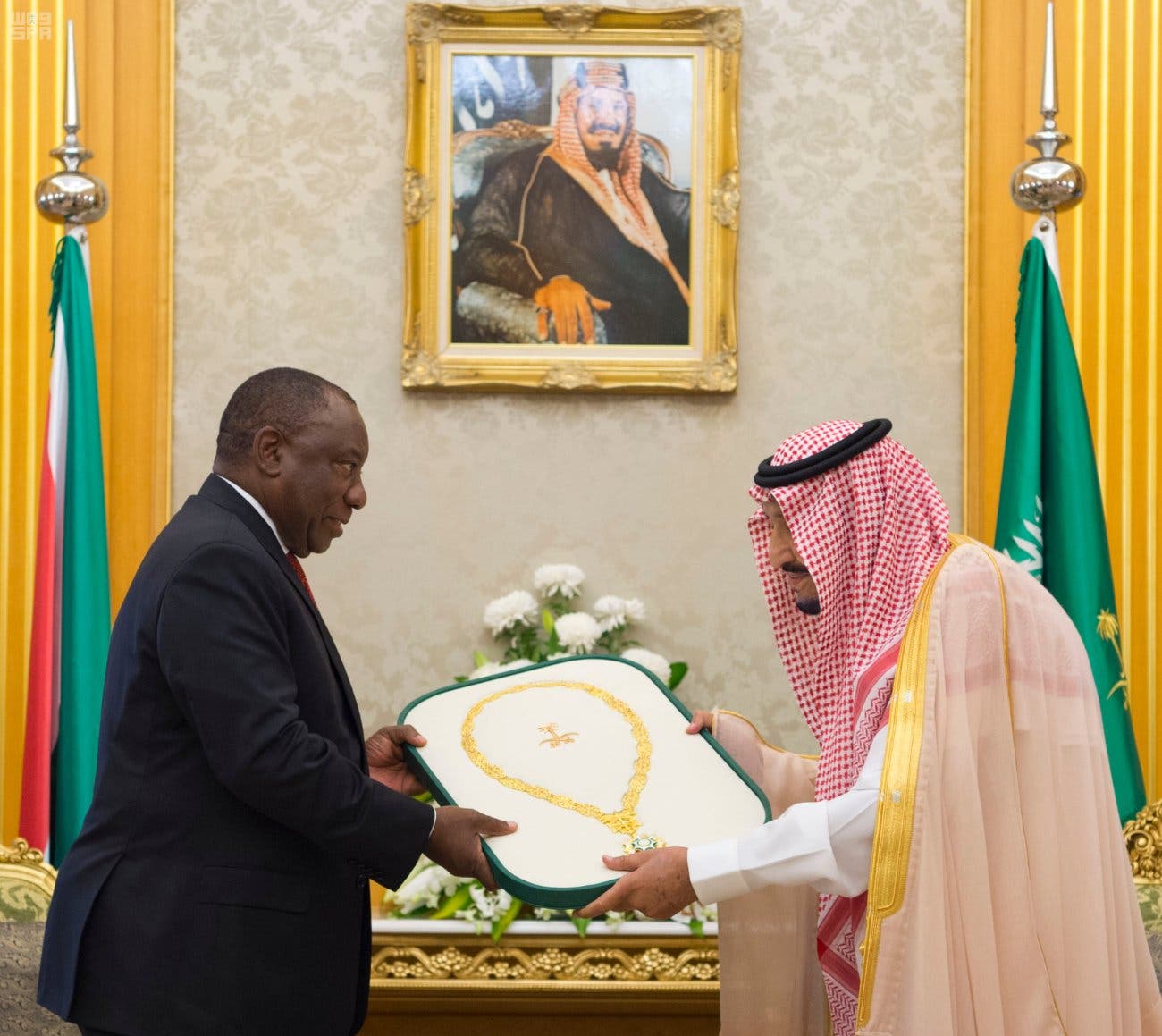 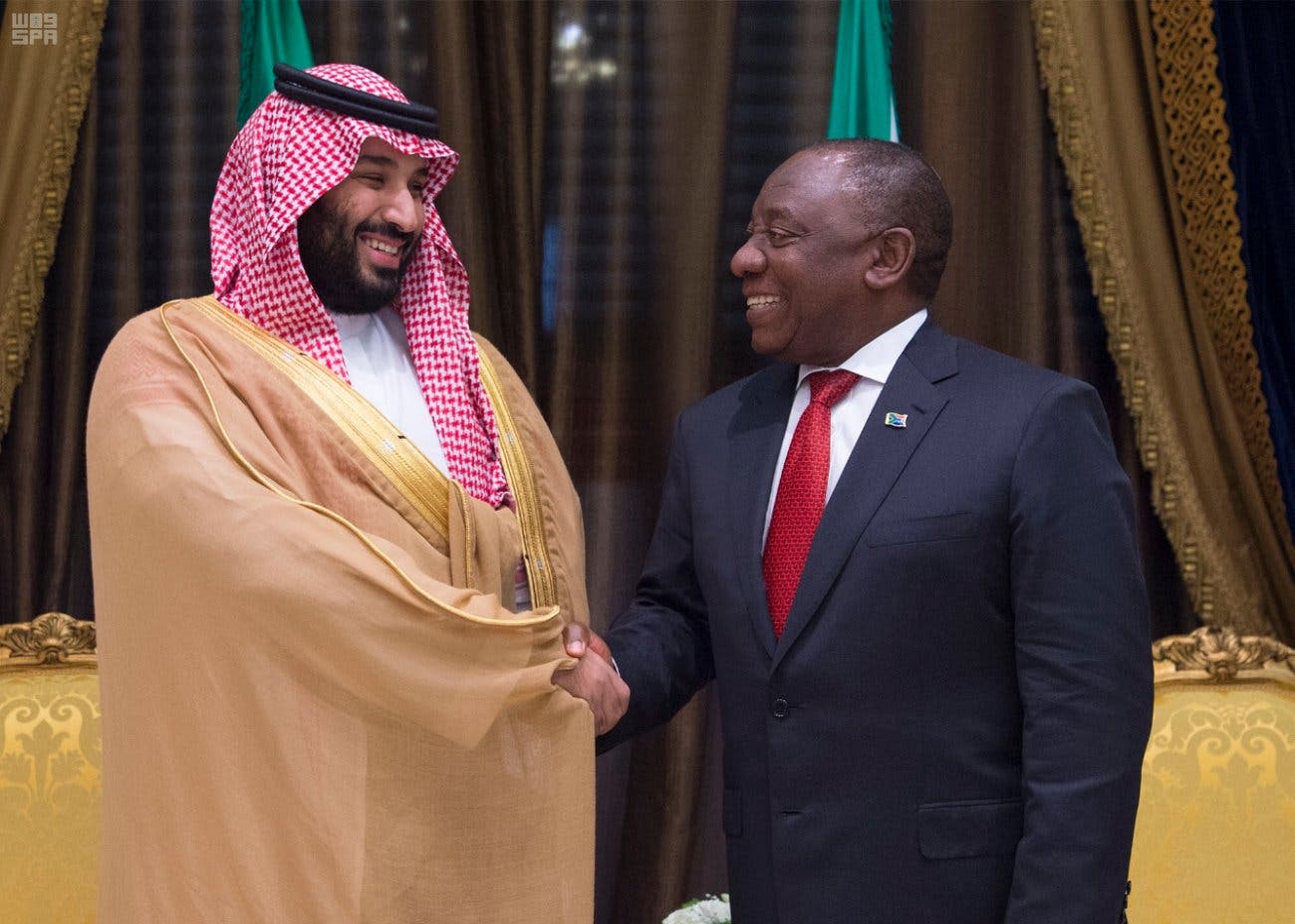 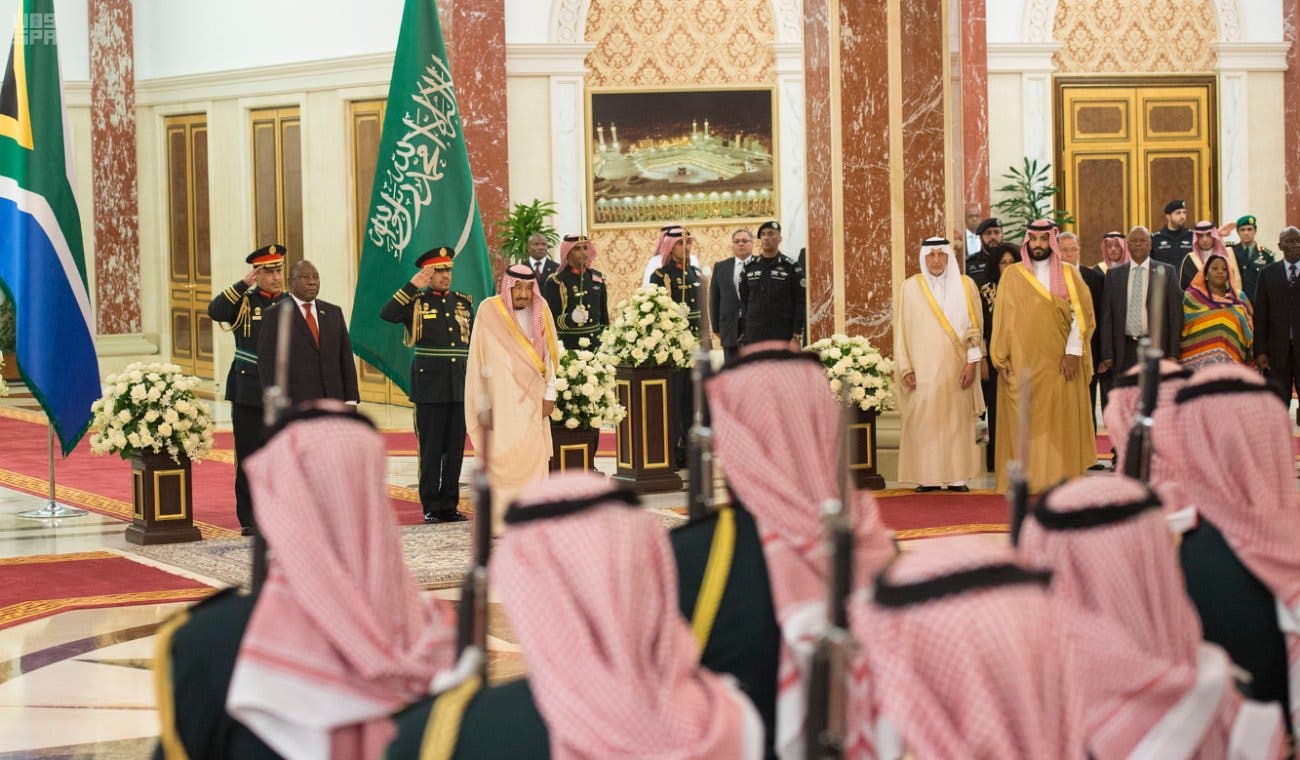 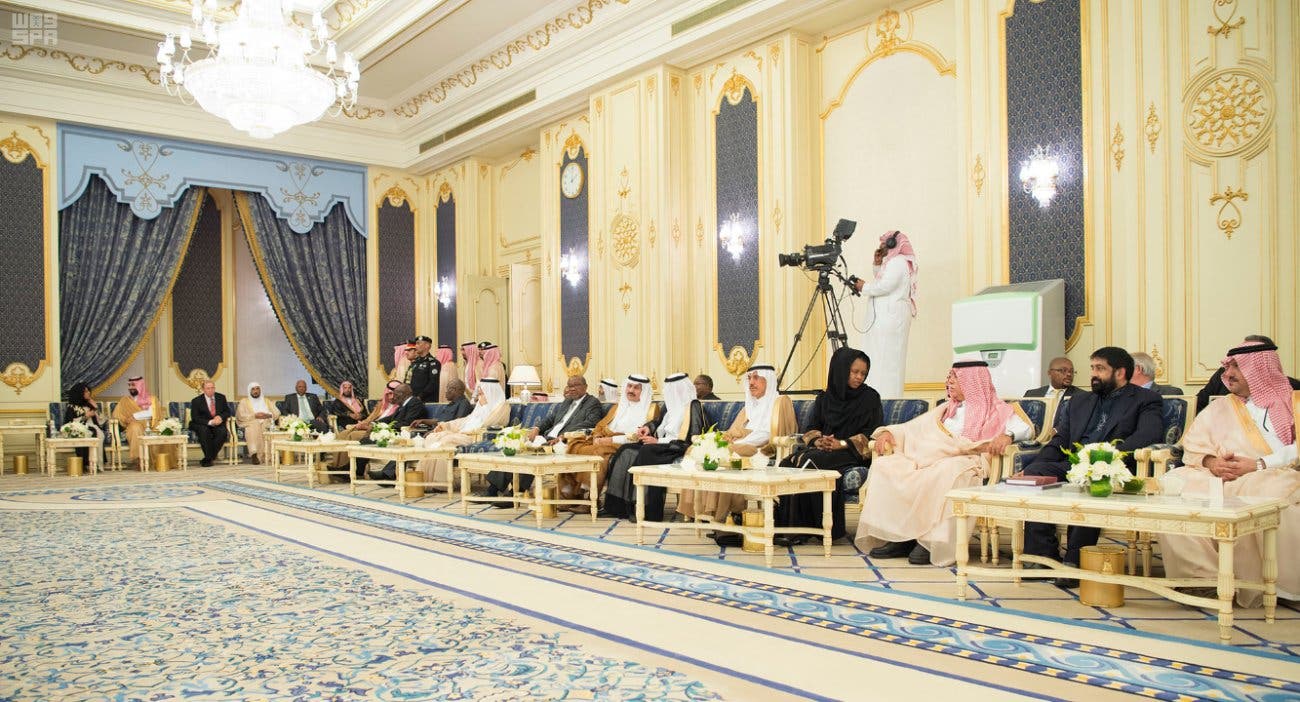 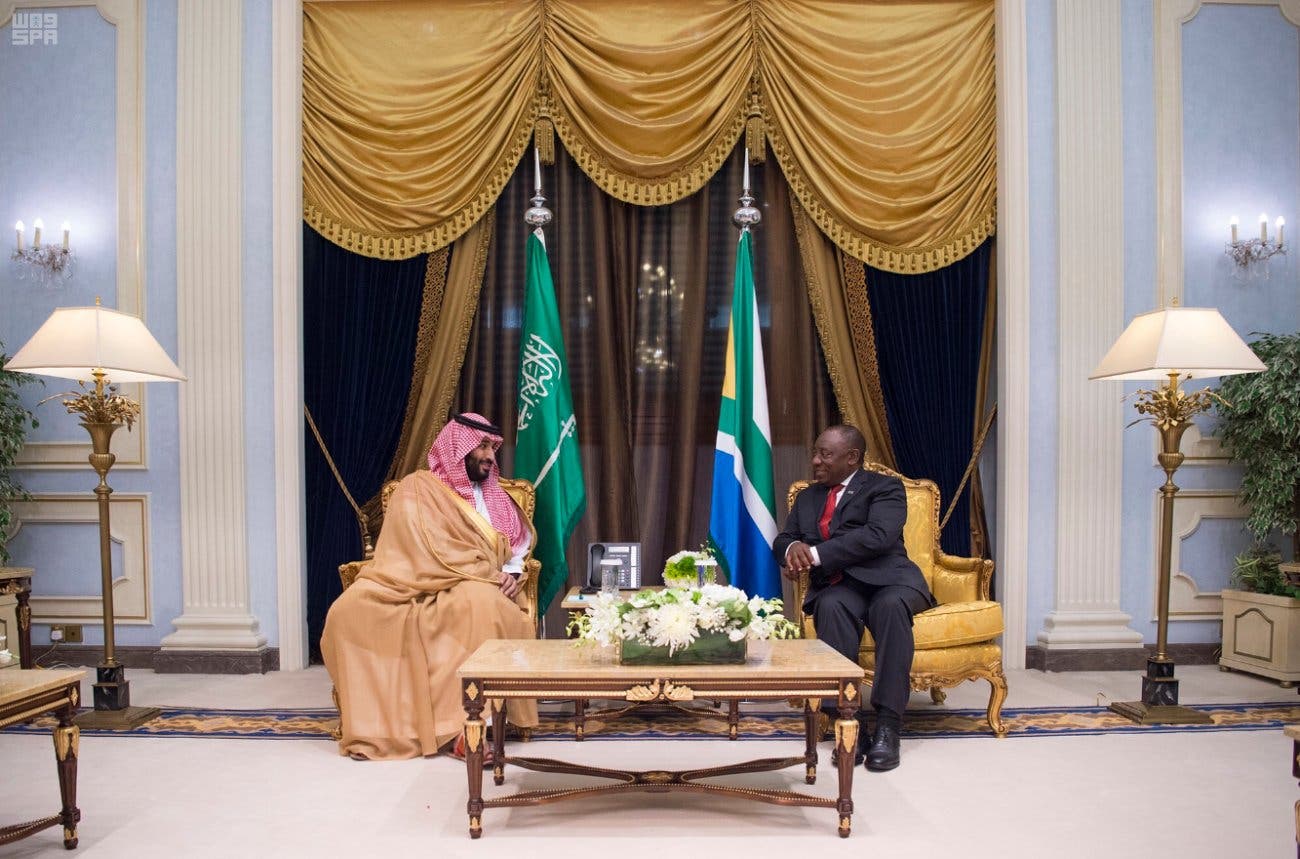 JEDDAH: King Salman has praised the efforts of Muslim scholars taking part in an Afghanistan peace conference in Saudi Arabia.
The king received a delegation of the scholars on Wednesday at his palace in Jeddah. The International Ulema Conference on Peace and Security, organized by the Afghanistan Organization of Islamic Cooperation (OIC), started on Tuesday.
“You are the best who work to serve Islam and Muslims, unify their words and ranks, and eliminate the Islamic world from wars and crises afflicting it as well as the scourges of extremism and terrorism,” the king said.
King Salman said Saudi Arabia has stood with the Afghan people in their suffering since the beginning of the Afghan crisis and the war.
Saudi Arabia has provided humanitarian and economic assistance and made continuous political efforts to renounce division and differences among the Afghan people, he said.
“Today, we are optimistic that your efforts will contribute to closing the page of the past and opening a new page in Afghanistan that would achieve the aspirations of the Afghan people for security and stability, and this requires adopting the approach of dialogue, reconciliation and tolerance as dictated by our Islamic religion,” he added, thanking the muslim scholars for their efforts.
The OIC Secretary-General, Dr. Yousef bin Ahmad Al-Othaimeen, delivered a speech on behalf of the scholars, expressed gratitude to King Salman for hosting the conference in Saudi Arabia.
He explained that more than 100 Islamic scholars from across the globe attended the conference to help the people of Afghanistan, who have suffered “war, death and terrorism,” with the aim to bring peace and stability.

During the meeting, they reviewed the bilateral relations between the two countries, especially in the economic fields and the opportunities to develop them according to the Kingdom’s Vision 2030, Saudi Press Agency reported.

The meeting was attended by senior Saudi and British officials.

Following the meeting, Hammond confirmed his country’s support for the Kingdom’s ambitious plans.
In an official statement issued on the occasion of his visit to the Kingdom, the Minister said that the two countries are working closely to achieve the Saudi vision to diversify sources of income.
The British minister noted that the promotion of trade and investment opportunities will be of great benefit to both countries private and public sectors.

The pertinent authorities should act accordingly, the statement said.

In another royal order, King Salman pardoned all military men, who have taken part in Operation Restoring Hope of their respective military and disciplinary penalties, Saudi Press Agency (SPA) said.

This is in appreciation for the services of all military men, across the armed forces, their heroic deeds and the sacrifices they are making during the operation.

This is also due to the King’s keenness to bring happiness to the military men and their families, and on the basis of reports submitted by Crown Prince Muhammad, deputy premier and minister of defense.

On behalf of King Carl Gustaf of Sweden, the Honorary President of the Global Scout Fund, and 50 million scouts, the Global Scout Fund Director John Guegigan thanked Custodian of the Two Holy Mosques King Salman and Crown Prince Muhammad Bin Salman, deputy premier and minister of defense, on the occasion of young men and women scouts all over the world completing more than one billion hours of community service through the global scout project “Messengers of Peace”, which was launched from the Kingdom of Saudi Arabia in 2011, Saudi Press Agency said Friday.

Guegigan said that the Peace project is the world’s largest community service ever, contributing to the achievement of the United Nations’ goals for sustainable development and communities around the world.