In line with the strategy to enhance the quality of life on its beaches, King Abdullah Economic City (KAEC) has announced the launch of its summer residential offering under the slogan “Own a Turquoise View and Get a Car Free.”

The offer is valid until Aug. 31. The live-by-the-sea campaign, launched for the first time ever, offers a free car upon purchasing a residential unit, with flexible payment plan over the course of five years with zero interest, and only 20 percent down payment.

“The residential communities in KAEC offer a collection of lifestyle elements and amenities which is unprecedented for any developer in Saudi Arabia, especially for those seeking entertainment, relaxation and rejuvenation with a direct view of the Red Sea and within a progressive, private and safe environment supported by technologically advanced infrastructure and world-class amenities,” said Charles Biele, CEO of KAEC’S Real Estate Development Company.

The campaign offers families and investors a wide range of housing solutions, making homeownership possible for all Saudi citizens, as well as an enriching lifestyle in KAEC and helping realize Saudi Vision 2030.

The KAEC is the largest privately funded new city in the world. Situated on the west coast of the Kingdom, KAEC covers an area, approximately the size of Washington, DC. KAEC comprises King Abdullah Port, the Coastal Communities residential districts, the Haramain Railway district and the Industrial Valley. The city is under development by Emaar, The Economic City. The Saudi port is amongst the fastest growing in the world. (File/SPA)

JEDDAH: Alphaliner has ranked King Abdullah Port at King Abdullah Economic City (KAEC) second among the world’s fastest-growing ports in 2018.
The port was ranked eighth in 2017. Its CEO Rayan Qutub said this indicates that it is on the right track.
Alphaliner specializes in analyzing maritime data, port capabilities, the future development of ships and shipping routes worldwide.

The events will be held at the new KAEC-Jeddah sales centre from November 24 to 28.

“Royal Greens Golf Community is our signature development. There is no other project in Saudi that brings together so many inspirational elements in one place. The exclusive gated community is surrounded by a global award winning 18-hole championship golf course with a 7-star clubhouse, as well as a unique family sports and leisure facility,” said Charles Biele, CEO of Real Estate Development Company (RED) in KAEC.

“The prestigious “Royal Greens Fairways” ready golf plots have been developed to provide a high quality environment designed to meet the needs of today’s affluent Saudis who aspire to a luxury lifestyle supported by technologically advanced infrastructure and world class amenities.”

The exclusive gated community of “Royal Greens Fairways” offers maximum privacy and security, as well as designed to have unmatched views of the 18-hole championship golf course. A number of selected plots will also enjoy of both the Red Sea and the golf course lakes. 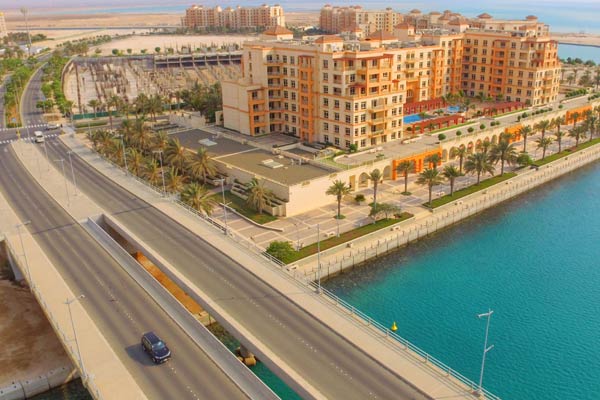 Saudi Arabia’s King Abdullah Economic City (KAEC), the largest privately-funded new city in the world, said it has awarded new construction and development contracts worth more than SR1.2 billion ($319 million) from the beginning of this year.

Of these contracts, around 20 per cent were allocated for the development of the KAEC’s industrial valley and the residential areas with its utilities, while the remaining 80 per cent catered to various projects, services, and products aimed at enhancing the living standards of the residents at Economic City, said a statement from KAEC.

The main focus was on projects linked to tourism, recreation, and sports facilities, it added.

CEO Ahmed Bin Ibrahim Lengawi said: “The economic development plans of the city continue to strengthen the strategic sectors in the city, including the logistics and industrial sectors. The Industrial Valley has so far attracted more than 110 national and international companies.”

“The development plans for the city are continuing so as to develop strategic sectors like the logistics and industrial sectors,” he added.-

This is part of a comprehensive project that Aramco is keen to implement with KAEC to supply the economic city with natural gas from Yanbu.

The diameter of the pipeline reaches 18 inches and has a length of around 13.7 kilometers, according to the low-pressure system.

The project would be an added value offered by the Industrial Valley to investors for allowing to reduce the operational costs of different companies, factories and investors in the city in addition to expanding the quality of target investments to include gas-dependent industries with competitive prices and features.

The pipeline project has several facilities, including a launch area, a joint free zone between KAEC and Aramco in the fifth phase of the Industrial Valley, and another delivery zone in the second phase.

Development works for the pipeline are expected to be completed within 15 months.

During the meeting, they reviewed bilateral relations between the two friendly countries, latest developments in the Middle East region and efforts being exerted towards them.

The audience was attended by Prince Khalid bin Salman bin Abdulaziz, Saudi Ambassador to the United States of America, Minister of State and Cabinet’s Member Dr. Musaed bin Mohammed Al-Aiban, Minister of Foreign Affairs Adel bin Ahmed Al-Jubeir, and a number of officials at the United States Department of State.

Earlier, recently confirmed US Secretary of State Mike Pompeo has arrived in the Saudi capital of Riyadh to begin his first regional tour as his country’s top diplomat.

Speaking at the opening session of the Top CEO 2018 forum, Fahd Al-Rasheed said the social and cultural aspects of the changes underway in Saudi Arabia were as significant as the economic transformation, and that the KAEC could expect big commercial and financial benefits from the shift toward leisure and entertainment.

“All round the world, entertainment creates big economic benefits. KAEC wants to take part in that,” he said, speaking at the Bay La Sun Hotel resort-based event, adding that 10 million square meters of the KAEC area had recently been designated as land for entertainment development.

“We have one of the top maritime ports in the world, we have big oil and gas facilities, but you have to give people what they want,” he said.

Al-Rasheed, who has been the CEO of KAEC since it was launched in 2005, said that music and other entertainment events had been behind the recent boom in visitors to the 67 square mile development an hour’s drive outside Jeddah.

KAEC is planned as an industrial, commercial and residential development beside a new port on the Red Sea, but leisure and cultural aspects have been increasingly emphasized as part of the Kingdom’s commitment to social development under the Vision 2030 plan.

Al-Rasheed said entertainment was a significant factor in the economies of countries such as Britain, South Korea and China, but especially in the US, where 44.5 percent of total employment is related to the entertainment business, which generated $700 billion of value to America’s gross domestic product.

He also pointed out that many companies in entertainment were small-to-medium enterprises, which are a focus of the Saudi economic transformation, which aims to encourage entrepreneurship.

Al-Rasheed said big developments such as Neom, the $500-billion giga-project at the northern end of the Red Sea, were needed to accommodate the booming Saudi population.

King Salman bin Abdulaziz Al Saud, chaired the Saudi Cabinet’s session at Al-Yamamah Palace, on Tuesday, during which the State’s General Budget for the fiscal year 2018 was approved.

King Salman bin Abdulaziz Al Saud addressed the nation, announcing the budget, as the largest expenditure budget in the history of the Kingdom. The budget, he said, takes into account the lower oil price levels compared to previous years, and has been planned in order to continue development and enhancement process towards achieving the Kingdom’s Vision 2030, that aims at increasing the size of the national economy and sustain its growth, through diversification of the economic base, sources of income and the capacity to adapt to developments and for overcoming challenges.

The King said that dozens of programs have been launched to realize the goals of diversifying the economic base and empower the private sector to play a major role, in sustaining expenditure efficiency, in order to realize appropriate economic growth rates, mitigate the burden on the citizens and tackle possible impacts, in addition to supporting the private sector.

He hailed the achievements related to decreasing the deficit of the budget of the current fiscal year  to 8.9% of the GDP  from 12.8% during the last fiscal year. Despite increasing the expenditure in next year’s budget,  he added that the target is to decrease the deficit  to be less than 8% of the Gross Domestic Product, in spite of the great and expansionary volume of the budget.

The King stated that government programs have managed to downsize depending on oil to about 50%, adding that the development funds and the General Investments Fund take part in the capital and investment expenditure, with portions that exceeded capital expenditure volume, in the budgets of previous years, in addition to government keeping leading with capital expenditure, at an increase of 13%.

As a result, the government decided to invest these successes, expand development and adjust the fiscal balance program till the year 2023.

While maintaining fiscal policies, including the level of debt to GDP to remain below 30% with a level of deficit to be gradually decreased.

The king said “this budget continues to disburse on various development sectors in all regions of the Kingdom at high rates. It also includes allocations for housing, and a large expenditure of government funds that would contribute to push the economic wheel forward, and provide more employment opportunities for male and female citizens.”

The king announced that he directed “ministers and all officials to raise the level of performance, develop government services and enhance the efficiency of expenditure and transparency to meet the aspirations and the satisfaction of citizens for the services provided to them as well as to reflect the desired objectives of the allocated amounts in this budget, and the emphasis on continuing to fight corruption and maintain public money.

He emphasized that the budget takes into consideration the “continuation of work towards comprehensive and balanced development in all regions of the Kingdom, without any distinction.”

Following are the highlights of the Saudi Budget 2018:

• The 2018 state budget has the biggest expenditure of any adopted budget in the kingdom’s history, and it will be funded from the following sources: 50% from oil revenues, 30% from non-oil revenues, 12% from debt and 8% from government balances

• The budget allocates 2.5 billion riyals a month to the Citizens’ Account in 2018

• General expenditure in 2018 to include general budget expenditure, expenditure of Public Investment Fund, other development funds

• Expenditure of Public Investment Fund, other development funds in 2018 to reach 133 bln SAR