King Salman Humanitarian Aid and Relief Center (KSrelief) handed over
138 tons of medicines to the Director General of the Public Health and
Population Office in Marib province Dr. Abdulaziz Al-Shaddadi as
contribution to cover the deficit in the medical sector and address
cases of suspected dengue fever in some parts of Yemen.

Dr. Al-Shaddadi explained that the medicines consist of 74 tons of
intravenous solutions and 64 tons of dialysis medicines to be delivered
to health centers.

Al-Shaddadi thanked the Riyadh-based facility for its continuous support for the governorate.

KSrelief Supervisor General meets with Yemeni Minister of Local Administration
Advisor-Royal Court and Supervisor General of King Salman Humanitarian Aid and Relief Center Dr. Abdullah Al Rabeeah met here today with Yemeni Minister of Local Administration Abed Araqib Fateh.
During the meeting, they discussed the humanitarian issues and the latest developments of the relief operation in Yemen in addition to supporting cooperation between the two sides.
In a press statement, the Yemeni minister thanked the Custodian of the Two Holy Mosques King Salman bin Abdulaziz Al Saud, HRH the Crown Prince and KSrelief for unlimited support for the Yemeni people.

KSrelief Supervisor General meets with UN Regional Humanitarian Coordinator for Syria
Advisor-Royal Court and Supervisor General of King Salman Humanitarian Aid and Relief Center Dr. Abdullah Al Rabeeah met here today with UN Assistant Secretary General and Regional Humanitarian Coordinator for the Syria Crisis Panos Moumtzis.
During the meeting, they discussed issues pertaining to the humanitarian and relief affairs and ways of enhancing cooperation between the two sides to support the Syrian people during the current humanitarian crisis.
Dr. Al Rabeeah briefed the UN official on the KSrelief programs and projects supporting the Syrian refugees, disclosing that the Kingdom of Saudi Arabia hosted 281,000 Syrian refugees as visitors where the Kingdom provided for them and their families the appropriate living conditions.
He affirmed that every Syrian expatriate in the Kingdom has the right of free education in addition to labor and health, adding that the Kingdom sent giant relief campaigns to Syria through the border ports with Jordan.
For his part, the UN Regional Humanitarian Coordinator for the Syria Crisis thanked the KSrelief for the great support provided to the Syrian refugees in various areas.

JEDDAH: The King Salman Humanitarian Aid and Relief Center (KSRelief) has launched a camp for displaced Yemenis in Bani Jaber, in Al-Khokha directorate in Hodeidah governorate.
The camp will be able to accommodate in its first phase 420 displaced persons, providing them with tents, blankets, sleeping rugs, water tanks and mobile clinics.
It is worth mentioning that the project aims at distributing 500 tents, 3,000 blankets and 1,000 mats benefiting 30,000 displaced persons. The camp also houses mobile medical clinics offering health services to refugee camps. These include Al Batiniyyah clinic, an emergency ward, a laboratory, a pharmacy, a nutrition section for malnourished children, a reproductive health section, an obstetrics and a gynecology clinic and a hypnotherapy section. The camp also features an ambulance and a mobile clinic for the neighboring camps served by 25 female volunteers that will receive training courses in the field of community health.
KSRelief will also provide water and sanitation services to the camps, supplying 3,500,000 liters of drinking water, 3,150,000 liters of water for public use, 34 2,000-liter water tanks, 1,000 10-liter plastic containers, 500 bags containing basic and hygiene materials,
The camp also includes 100 emergency toilets, a waste disposal site and a sewage disposal plant.
Director of the Executive Unit of Displaced People Camps Najeeb Al-Sa’adi expressed his sincere thanks to the Saudi leadership, represented by King Salman, and Crown Prince Mohammed bin Salman for their efforts to alleviate the suffering of the Yemeni people.
Al-Sa’adi uttered his admiration for the various services provided by the camp.
Abdullah Al-Tayyar, coordinator of KSRelief in Aden Abdullah expressed happiness and optimism in inaugurating this camp benefiting 30,000 displaces persons. 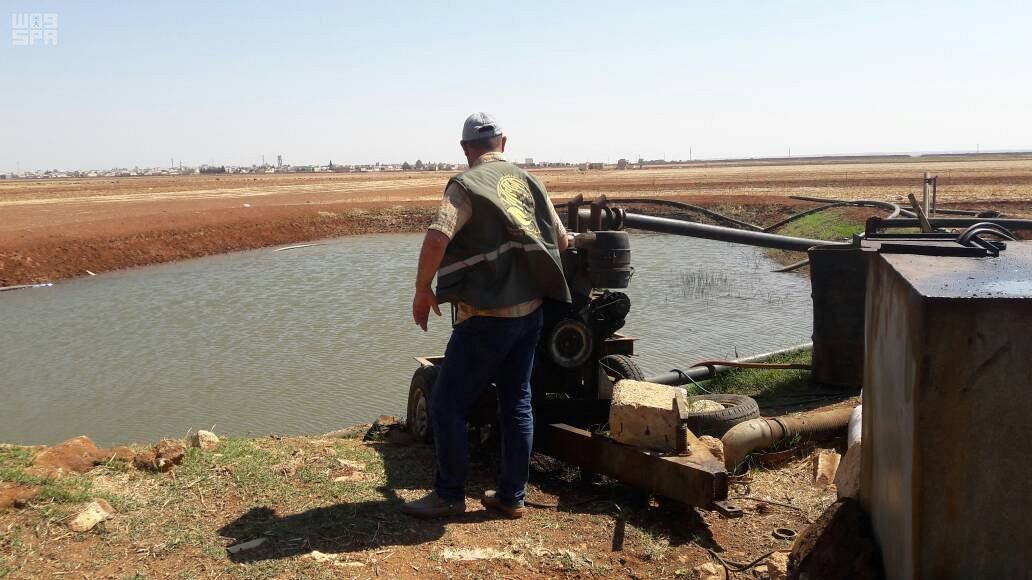 The surveys included 16 villages in Mare’ District and 14 villages
in B’zaah District, where 409 agricultural lands were chosen from a
total of 614 lands, with a total area of 30.821 Dunams, as the pumps in
this land need 90,990 liters of diesel monthly scheduled to be
distributed within the next days. 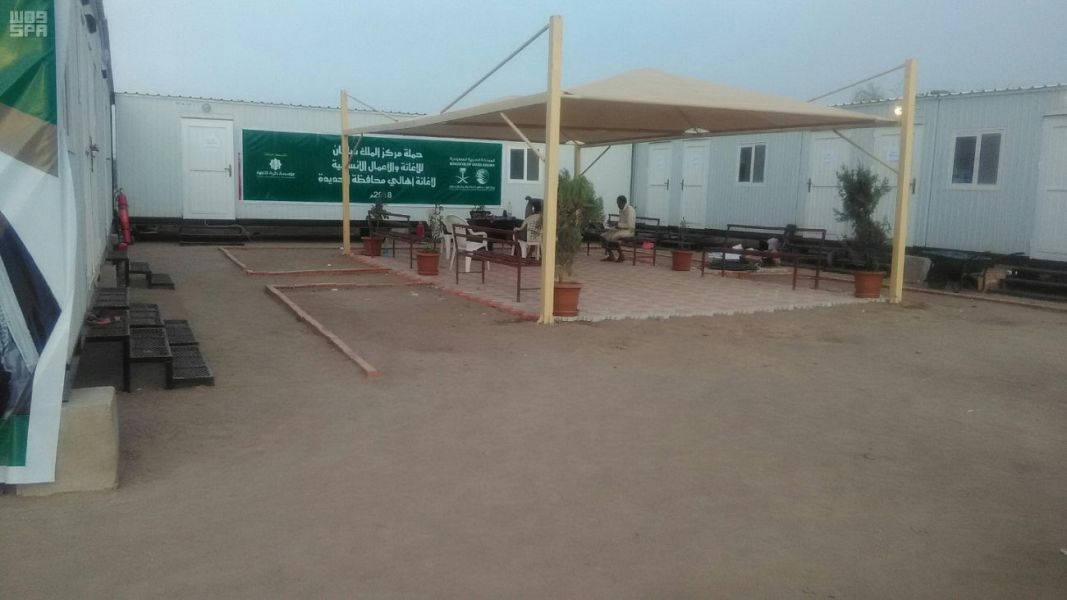 The camp in its first phase accommodates 420 displaced persons,
where shelter materials were provided with tents, blankets, rugs, water
tanks, and ambulatory medical clinics, as well as it includes an
ambulance and a mobile clinic for neighboring camps and 25 volunteers to
be provided with training courses in community health. 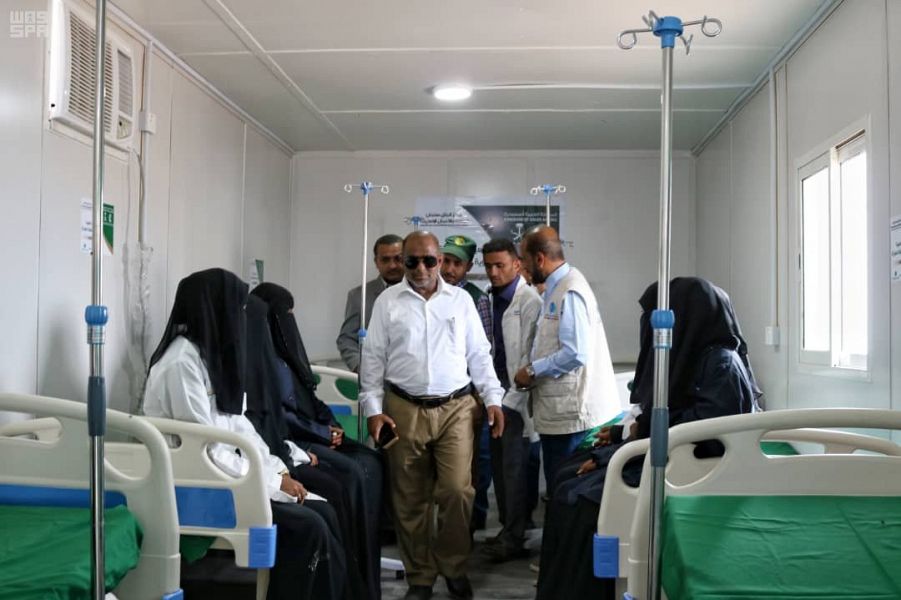 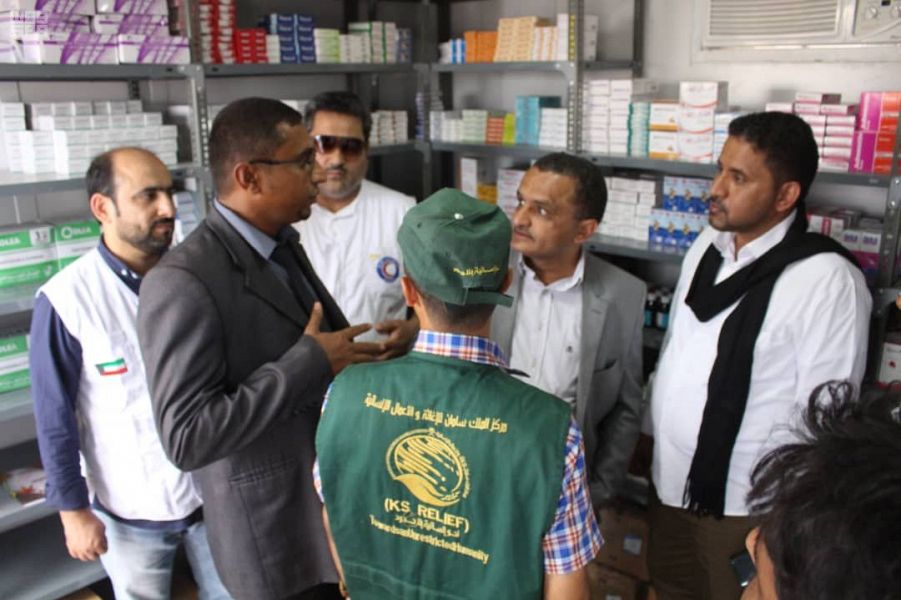 During the meeting, they discussed means of cooperation between KSRelief and AFD in the humanitarian and relief fields.

During the meeting, they reviewed issues of mutual interest on humanitarian and aid affairs and bilateral relations between the two sides.

Dr. Al Rabeeah briefed the French official on the Kingdom of Saudi Arabia’s humanitarian and aid efforts, represented by KSRelief, for affected peoples in the world, especially Yemen.

The Vice Chairman expressed his appreciation of the Center’s distinctive humanitarian roles in Yemen and the world.

KSRelief team in Marib to study the situation for treatment inside Yemen. (SPA)

RIYADH- A medical team from the Kingdom supervised by a committee from the King Salman Humanitarian Aid and Relief Center (KSRelief) has conducted a detailed survey in Marib to explore options for medical treatments inside Yemen.

Speaking to Arab News on Thursday after his return from Marib, Dr. Abdullah Al-Wadai, deputy director for medical and environmental assistance at KSRelief, who headed the committee said: “We were in Marib on Tuesday and Wednesday, it was a study tour about the situation there and how to implement the initiative of King Salman for establishing specialized medical centers for critical cases and diseases facing the Yemeni people.”

“The initiative is aimed at finding solutions for serious or difficult cases like cardiac disease or malignant tumors, and find a way it can be treated inside Yemen,” Al-Wadai said.

The committee, formed of KSRelief and representatives from the finance and health ministries along with the medical services of the Armed Forces in Yemen, met to carry out the plan for treatment inside Yemen as well as for patients going abroad for treatment.

“To execute the plan, we have suggested to start with a cardiac center in Marib,” Al-Wadai told Arab News.

In May this year, Al-Wadai headed a medical team from KSRelief and inspected a prosthetic limbs center in Marib, which has been funded by the organization for the second consecutive year.

The aim was to view the progress of work, implement the specifications of the contract with the partner organization tasked with the operation and ensure that services are provided.

The center fitted 305 prosthetic limbs last year for those affected by the mines planted by Houthi militias.

DHAKA: On Sunday morning, Hajjera Khatun, 34, a Rohingya refugee of Leda Camp, Cox’s Bazar, visited the Malaysian Field Hospital (MFH) to see her four-year-old son Mohammad Nejad, who cannot walk because of his leg, which has been crippled since birth.
“I have visited this hospital several times before. Probably my son requires surgery and the doctors prescribed some medicine today with the suggestion to bring the child again after one month,” Khatun told Arab News.
For many of the Rohingyas in the Cox’s Bazar area, this hospital is one of the few last resorts for receiving quality treatment in the Rohingya camp areas.
Since December 2017, the MFH has treated more than 25,000 patients from the Rohingya and Bangladesh community, including 768 surgeries.
The 55-bed field hospital was set up by the Malaysian government in response to the Rohingya humanitarian crisis with the support of King Salman Humanitarian aid and relief center (KSRelief) and the UAE.
KSRelief donated a large amount of medical aid equipment to the MFH last Friday to facilitate medical support to Rohingya refugees in the relief camps of Cox’s Bazar.
Dr. Sulieman Ahmed Al-Shurei of KSRelief and Hussein Al-Anzi, director of the office of the Ambassador of Saudi Arabia handed over the equipment to the MFH director, Dr. Mohd Arshil bin Moideen.
“We have received 18 high-value batches of medical equipment from KSRelief, which will help a lot in our treatment and diagnosis process. So far KSRelief has donated around $400,000 in our hospital operations,” Moideen told Arab News.
This level 3 tertiary field hospital provides all sorts of medical care, such as two operating theaters, ICU, wards, dental services, emergency department, labor room, pediatric unit, orthopedic unit, internal medicine unit, Obgyn unit, preventive medicine unit and a logistic unit, Moideen said.

The US official was briefed on the activities of KSRelief. (SPA)

Ark Triger, the senior staff Republican officer in charge of Middle East affairs at the foreign relations committee of the US Senate, on Monday visited the Riyadh-based King Salman Humanitarian Aid and Relief Center (KSRelief).

The US official met senior officials including Ahmed bin Ali Al-Baiz, assistant supervisor general for operations and programs.
Triger was briefed on the activities and achievements of KSRelief, which is running relief programs in 42 countries around the world without any discrimination. KSRelief officials told the visiting dignitary that the center had initiated 450 different projects out of which 274 programs were operational in Yemen.
During the meeting a number of issues regarding relief and humanitarian affairs were also discussed.
Saudi Arabia topped donor states to the 2018 UN Yemen Humanitarian Response Plan (UNYHRP) by donating $530.4 million out of a total of $1.54 billion, the UN Office for the Coordination of Humanitarian Affairs (OCHA) said in a report.
Saudi Arabia also topped donor states outside the UNYHRP 2018 by providing $196 million out of $466.4 million.
The strategic objectives of the YHRP are: Saving lives, protecting civilians, enhancing equitable aid distribution, guaranteeing the flexibility and durability of humanitarian work.
As a response to this distress call, a royal decree to establish the Yemen Comprehensive Humanitarian Operations (YCHO) Support Center was issued, where national capacities work tirelessly to provide logistic operational support and coordination to facilitate the delivery of aid provided by INGOs and NGOs in Yemen alike.