Abbas Al Haj Ahmed talks with his cousin Adam Bazzi over a video call while their family eats at iftar. (File/AFP)

LONDON: Muslims across the globe are bracing themselves for an unprecedented Eid Al-Fitr, one where lavish lunches and rooms filled with relatives and loved ones will be replaced with laptops and tablets.

Saudi Arabia announced on Friday that Eid Al-Fitr will begin on Sunday, May 24. This year, however, Muslims around the world are being forced to adapt to new circumstances given the outbreak of the coronavirus disease (COVID-19) pandemic. Movement and large gatherings have been prohibited in an attempt to curb the spread of the virus.

“I’ve been pretty lucky to receive some ka’ak cookies from my aunties, but I’ll be spending Eid alone. My parents live in China. I might ask them to have a video call with me. I miss them,” Sara Ahmad, who lives in Cairo, told Arab News.

“I always used to go for Eid prayers with my family on the morning of, but since mosques are closed, I might do it alone at home,” she said.

“If I get really lonesome, then I might stop by an aunt’s house for breakfast. I’ll be sure to have no physical contact with her though,” Ahmad added.

Eid is neither the first nor only religious holiday to fall victim to the virus. Last month, Christians around the world also had to celebrate Easter at home. Pope Francis livestreamed his Easter vigil from an empty St. Peter’s Basilica after conducting a Good Friday service to usher in the festival weekend.

“I live in a hotel in India and I’m quarantined there. I asked permission from the hotel manager to let my Indian friend join me tomorrow,” Lebanese Sarah Siblini told Arab News.

“Otherwise I’ll be having a zoom call with my family and another one with university friends from around the world,” she said.

After traveling back to Lebanon from Dubai, Lebanese consultant Houssam Rifai was forced to self-isolate for 14 days following rules issued by the government for everyone coming into the country from abroad.

“It’s been very tough not seeing anyone for this long,” Rifai told Arab News on his ninth day of self-isolation.

“And now I’ll have to spend Eid in an Airbnb alone. Usually, we have a huge lunch at my grandma’s place with family from all over the country, even some who travel back to Beirut from abroad like me,” he said.

“I’ll have a video call with my parents and speak to my friends, but this is definitely not the Eid I was expecting,” he added.

Much like their Christian counterparts, Muslim community figures and imams have stated that they will be livestreaming their Eid prayers to ensure that people adhere to lockdown and curfew rules, wherever they are in the world.

In the UK, imams sought to use both livestreams and WhatApp groups to ensure the tradition continues, albeit with a few changes. Many, however, say that a virtual Eid is not the same as an in-person one.

“I would also go visit my brothers and their families, but now everything has changed.”

While many have been adopting a virtual approach to Eid, others have chosen to still meet in person while maintaining the appropriate distance from one another.

“I’ve been going to my village almost every year since I was a baby. We are a big extended family, and we usually gather at my grandpa’s, but this year not everyone feels comfortable with gathering,” Beirut-based Aya Chamseddine told Arab News.

“Some feel guilty; they’ll just drive to say hi to grandparents and go back to Beirut,” she said. “It’s definitely not the same.”

NEW YORK: Saudi Arabia’s permanent representative to the UN told a high-level meeting on the coronavirus disease (COVID-19) pandemic, that the Kingdom’s decision to suspend prayers in the Two Holy Mosques during Ramadan had been “painful.”
Speaking at the virtual gathering organized by the permanent delegation of Morocco to the UN, Abdallah Al-Mouallimi said that the Kingdom’s decision confirmed that Islam bolstered life and put human health above all other considerations.

General view of Kaaba at empty Grand Mosque, as a preventive measure against the coronavirus disease (COVID-19), during the holy month of Ramadan, in the holy city of Mecca, Saudi Arabia May 7, 2020. (Reuters)

Muslim worshippers perform the “Tarawih” nightly prayer during the holy month of Ramadan, while keeping their distance amid the COVID-19 pandemic, at the Grand Mosque, Islam’s holiest site, in the Saudi city of Mecca, late on May 8, 2020. (AFP)

LOS ANGELES: With coronavirus shutdowns continuing throughout Ramadan, Makkah will only be allowing clerics to attend the nightly Taraweeh prayers in person.

But Muslims will be able to digitally attend the prayers thanks to “Wahi,” a virtual reality experience that can bring them to Makkah from the safety of their homes.

#WATCH: Muslims can digitally attend prayers inside #Makkah‘s Grand Mosque during #Ramadan thanks to @Wahi360 – a #VirtualReality experience @Almotaz
https://arab.news/87cvy 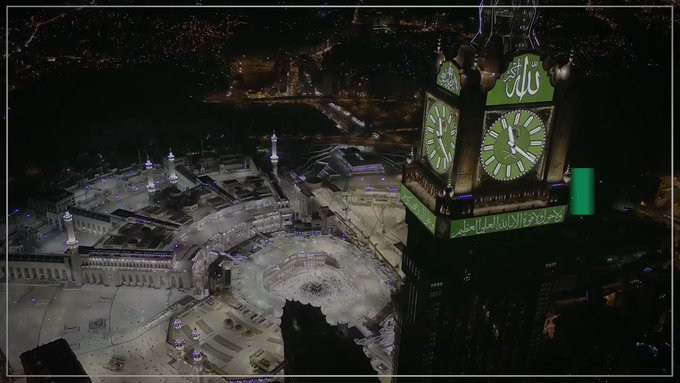 30 people are talking about this

The nine-minute film was made using a VR camera rig: six cameras pointing in every direction. The footage was then edited together to give a 360 degree view during the challenging post production process.

“The virtual reality glasses give you a full experience of the visit,” Almotaz Aljefri, the film’s Saudi director, told Arab News. “You can go in all directions, raise your head or switch it right. This gives you more information than a regular video.”

The crew received support from the Saudi government, granting them access to Makkah, as well as the use of drones and helicopters.

The film, which was made alongside the New Media Center at the Ministry of Culture and Information, is available on YourTube and has now been viewed more than 11 million times.

“We were surprised along with the staff that the views reached just last month more than 8 million and we discovered that the reason is definitely the coronavirus, the movie has given the chance to many people who cannot now go to the Grand Mosque in Makkah, to visit it through this technology,” AlJafri said.

“I believe that “Wahi” will allow you to practice all your rituals in Ramadan from your home.

“You can wear the glasses to see and tour the Grand Mosque and there is also historical landmarks and even the people who visit the Grand Mosque personally they might find it hard to get close to certain spots for example the Black Stone, circumambulation area, you can now easily wander around it as you wish at any time.”

In the midst of a global health crisis, Muslims are having to observe Ramadan in a new way. But thanks to new technologies, films like “Wahi,” mean they will not let the virus get in the way of their faith.