1 / 7
Joined by government ministers he looked at the building work. (SPA) 2 / 7
The Crown Prince was shown the expansion works in the Grand Mosque. (SPA) 6 / 7
Meanwhile, as the Crown Prince and ministers visited, Muslims continued to worship. (SPA) Saudi Arabia’s Crown Prince Mohammed bin Salman has been photographed during a visit to the Grand Mosque in Makkah where he was briefed on the current expansion project aimed at expanding the area for Muslims to pray.

During his visit he took a moment to pray. He also entered the Kaaba and kissed the Black Stone, while worshippers watched.

The Crown Prince had met with government ministers prior to his visit to the holy site, and he was briefed on the ongoing works.

He also went into the Kaaba and onto the roof of the historic structure looking down on the white circumambulation area, where Muslims walk around as part of Umrah. 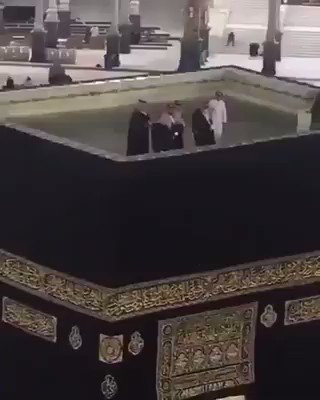 959 people are talking about this