1 / 10
National day celebrations showcased the public with its international multimedia show and state-of-the-art fireworks technology. (AN photo by Huda Bashatah) 2 / 10
National day celebrations showcased the public with its international multimedia show and state-of-the-art fireworks technology. (AN photo by Huda Bashatah) 3 / 10
National day celebrations showcased the public with its international multimedia show and state-of-the-art fireworks technology. (AN photo by Huda Bashatah) 4 / 10
National day celebrations showcased the public with its international multimedia show and state-of-the-art fireworks technology. (AN photo by Huda Bashatah) 5 / 10
National day celebrations showcased the public with its international multimedia show and state-of-the-art fireworks technology. (AN photo by Huda Bashatah) 6 / 10
National day celebrations showcased the public with its international multimedia show and state-of-the-art fireworks technology. (AN photo by Huda Bashatah) 7 / 10
An enchanting view of fireworks display in Riyadh. (SPA) 8 / 10
An enchanting view of fireworks display in Riyadh. (SPA) 9 / 10
An enchanting view of fireworks display in Riyadh. (SPA) 10 / 10
An enchanting view of fireworks display in Riyadh. (SPA)

JEDDAH: Saudis came together on Sunday for the grandest national celebration yet.
With 900,000 fireworks set off simultaneously from 58 platforms across 20 cities in the Kingdom, the General Entertainment Authority (GEA) is aiming to make the Guinness World Records for the largest fireworks display.
According to Guinness, the record to beat is the Philippines New Year celebrations in 2016, with 810,904 fireworks, which lasted just over an hour in the pouring rain. That beat previous records set by Dubai in 2014 and Kuwait the year before.
But if that’s not enough, the GEA has its bases covered. Nothing says patriotism like the flag, and so it is also planning to set another record by creating the largest national flag, measuring 400 meters by 350 meters, in the air by using lasers on 300 drones to trace the sword and the Shahada on the green backdrop of the fireworks.
The fireworks display was accompanied by national music for this occasion, which was supervised by Prince Badr bin Abdul Mohsin, the country’s first Minister of Culture, for more than 20 cities in the Kingdom. The main fireworks show lasted for 15 minutes, with 10 performances in some small- and medium-sized cities and 45 secondary performances.
The weekend was painted in all shades of green, as celebrations across the Kingdom started on Friday, and the flag was seen in all shapes and sizes. Men, women and children wore green as they set out to enjoy the many events arranged for the people to have the best National Day. 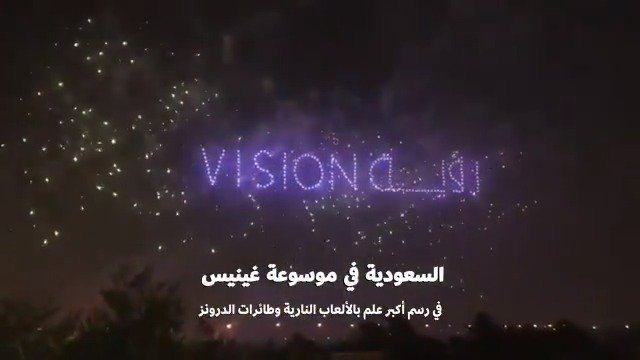 At the new waterfront in Jeddah, the festival that took place on National Day featured latest light technology on water screens, showcasing the Kingdom’s images from the time of the founder until the present.
3D lights also illuminated the surrounding buildings and waterfront. Using Virtual World technology, visitors interacted with it using their phones to see how the surroundings will look like in the future.
In Riyadh, the world-famous Cirque du Soleil brought its internationally acclaimed stage show to the Kingdom for the first time. The special performance, at King Fahd International Stadium on Sunday, was tailored to reflect the theme of Saudi National Day. It featured the troupe’s trademark gravity-defying stunts, performed by acrobats from 26 countries, wearing 245 costumes. Electronic-music pioneer Jean-Michel Jarre also performed “The Green Concert” at King Abdullah Financial District in Riyadh on the same day. The live show brought the Frenchman’s music to life through the use of visuals, lights, lasers and other incredible effects.
One of the most breathtaking events of the day was the Saudi Royal Force show presented by the Saudi team Saqoor Al-Saudia and the UAE team Al-Fursan. Twelve aircraft participated in a dazzling show that involved freefall movements and scattering the bright colors in the sky of Jeddah.
The teams embodied the spirit of love and brotherhood between the two countries in the sky of Jeddah.
The fighter jets will be flying over Riyadh on Monday at 4:45 p.m. at Masmak and Al Faisaliah Tower and other areas. The show will end in the Eastern Region (Dammam) on Tuesday at 4:45 p.m. at Alkhobar Corniche and Ethraa center as well as other areas.
It is worth mentioning that the traffic department created a plan for dealing with any closed roads because of the crowds and created detours so people did not get stuck in the traffic caused by the celebrations.