Like other Saudi women, she’s not allowed to drive or move around freely. But Somayya Jabarti will soon be setting the news agenda for thousands of readers in the Middle Eastern kingdom.
In what appears to be a first for male-dominated Saudi Arabia, Jabarti has been appointed editor of a major newspaper, the English-language Saudi Gazette.
She will take over as editor-in-chief from her longtime mentor, Khaled Al Maeena, the outgoing editor said in an article published Sunday on the newspaper’s website.
“I’ve had the goal almost as long of wanting to see a Saudi woman enter the male-dominated bastion of editors-in chief,” Al Maeena wrote. “It was not a question of gender but of merit that decided and earned her this opportunity.”
Jabarti’s appointment has generated praise on social media. But it remains to be seen how it will be received by the larger public in the conservative kingdom, where religious interpretations impose a de facto ban on females driving, among other restrictions involving women. 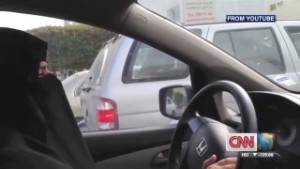 “This is a totally new step for Saudi Arabia,” Saudi journalist Essam Al Ghalib told CNN. “She is very qualified and it’s about time. But how will people react, we’ll have to wait and see.”
“The biggest challenge she may face is being accepted by the male-dominated circle of journalists,” he said.
Jabarti told CNN that she is unfazed.
“It is a male-dominated field, like many media in the world,” she said. “There will be challenges, but there is ground to be broken. This is just the starting point.”
Jabarti began her career in journalism in 2003 as a reporter and translator for the Arab News, then headed by Al Maeena. She eventually rose to deputy editor-in-chief at the newspaper in 2011 before joining the Saudi Gazette with Al Maeena.
The Saudi Gazette has a circulation of about 47,000, Al Maeena told Al Arabiya News in September.
Jabarti will take over the newspaper amid significant challenges to press freedom in Saudi Arabia.
Reporters Without Borders recently said Saudi Arabia ranks near the bottom of countries around the world in press freedom.
The organization cited the arrests and punishment of journalists who wrote about sensitive issues in Saudi Arabia, including religion and the ban on women driving.
On Sunday, the Saudi Gazette also carried a story citing a spokesman for the Ministry of Culture and Information threatening to shut down online news sites that “publish offensive material about Islam, the country, or traditions.
ru