3 / 4
Saudi Arabia’s King Salman and other world leaders have arrived for the Arab-European Summit in Sharm El-Sheikh. (Screenshot) SHARM EL-SHEIKH:  Arab and European leaders pledged at their first joint summit on Sunday to fight terrorism together.

Egyptian President Abdel-Fattah El-Sisi opened two days of talks at the Red Sea resort of Sharm El-Sheikh with a speech celebrating what he said was historic cooperation between the Arab League and the European Union.

Leading the Saudi delegation, King Salman said the Kingdom was one of many countries that had suffered from terrorism. He called for even greater efforts to combat terrorist financing and money laundering, and to deny intellectual legitimacy to extremism.

The two-day meeting is intended to strengthen Arab-European ties and address a wide range common challenges. Among the issues on the leaders’ agenda are multilateralism, trade and investment, migration, security and the situation in the region.

“State-to-state relations cannot be established without full respect for mutual sovereignty and non-interference in internal affairs,” the king said.

He also held talks with British Prime Minister Theresa May, at which they discussed UK-Saudi relations, and the summit agenda. The king also met with the PM of Netherlands, Sweden and the president of Iraq during a dinner on Sunday evening. 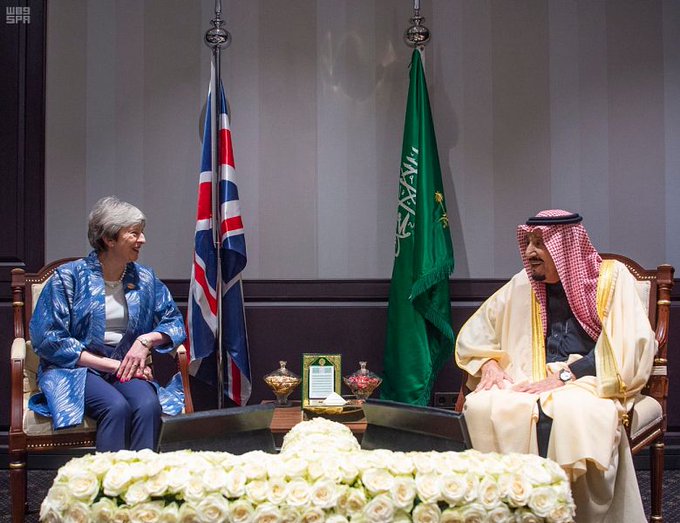 #UPDATE: #SaudiArabia‘s King Salman meets with UK PM Theresa May in Sharm El-Sheikh on the sidelines of the #ArabEUSummit, both sides discussed bilateral ties and regional issues and the agenda of the summithttps://bit.ly/2SnhcyP

In his opening speech, El-Sisi called for a broad plan to combat terrorism that would deprive extremists of funding and “include a strict security offensive to counter the terrorist organizations and other elements of terrorism. And there should also be an effective ideological offensive against their ideological platforms.”

Many summit delegates said Arab and European leaders sitting down together for the first time was an achievement in itself.

“The meeting is the message,” European Commission President Jean-Claude Juncker said, and EU foreign policy chief Federica Mogherini said: “This summit is, in itself, a deliverable.”

Europe’s migration challenge from the Middle East and North Africa is at the heart of the two-day meeting. The EU wants El-Sisi to order the Egyptian coast guard to pick up migrants leaving Libya and take them back to the African mainland, ensuring they do not become Europe’s responsibility.

“We must work together — countries of origin, transit and destination — in order to break the business model of smugglers and traffickers who lure people into dangerous journeys and feed modern-day slavery,” said EU Council President Donald Tusk.

“I am aware there are differences between us. We are not here to pretend. We agree on everything. But we face common challenges and have shared interests.”

Saeed Sadek, professor of political sociology at the Canadian University in Cairo, said the summit timing was important “because it comes after eight years of instability in the Mediterranean affecting Europe and the Middle East.

“Both sides want to know how can we stabilize the area further, produce stability, how can we deal with the consequences and prevent any further escalations.”