1 / 3
Saudi Crown Prince Mohammed bin Salman is greeted by Japanese officials upon his arrival in Osaka, Japan for the G20 summit. (SPA) 2 / 3
Saudi Crown Prince Mohammed bin Salman is greeted by Japanese officials upon his arrival in Osaka, Japan for the G20 summit. (SPA) 3 / 3
Saudi Crown Prince Mohammed bin Salman is greeted upon his arrival in Osaka, Japan for the G20 summit. (SPA)

DUBAI: Saudi Crown Prince Mohammed bin Salman arrived in Osaka, Japan on Thursday amid a stormy weather, ahead of this year’s G20 summit that will take place in the city.

The summit will take place at the International Exhibition Center in Osaka between June 28 and June 29. Leaders of the world’s biggest economies are expected to focus their discussions on global economy, trade and investment as well as innovation.

Air Force One likewise touched down after the Crown Prince’s arrival, with US President Donald Trump and his entourage aboard for the G20 meeting. 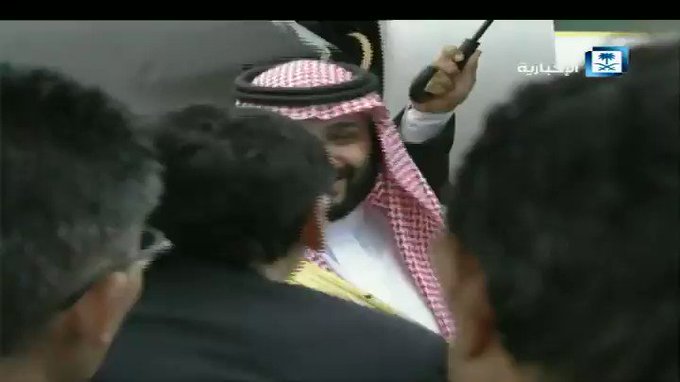 There have been reports that the US and China have agreed to a tentative truce in their trade dispute, ahead of a supposd meeting between leaders of the two nations at the G20 summit. Chinese President Xi Jinping has already arrived in Osaka.

Trump on May 10 slapped higher tariffs of up to 25 percent on $200 billion of Chinese goods and then took steps to levy duties on all remaining $300 billion Chinese imports. Beijing retaliated with tariff hikes on US goods.