British envoy Barrie Peach in his office in Jeddah. (AN photo by Huda Bashatah)

JEDDAH: British Consul General Barrie Peach has reached the end of his third posting in Saudi Arabia. His two years as Consul General in Jeddah — preceded by three years in Riyadh — ends in September.

As he prepares to continue his diplomatic career elsewhere, Peach sat down for an interview with Arab News to reflect on his time in the Kingdom and the optimism he feels for its future in light of Vision 2030. It was, he pointed out, an apt final interview.

“When I first arrived in Saudi Arabia, my first job was in charge of communications, so I was the press officer,” Peach said. “So, I’ve had a very long relationship with Arab News. In fact, the very first time I was interviewed by a newspaper was by Arab News in 2003.”

As Peach explained, it was no surprise that he came to work in the Middle East as a diplomat.

“I studied Arabic in Scotland and in Lebanon, so I guess the foreign office was a logical choice,” he said. “I’ve been with the Foreign Ministry since the year 2000. Since then, I have worked in a number of Arab countries. I suppose as a diplomat I’m slightly unusual in that I’m coming to the end of my third posting in Saudi Arabia. Most commonly, diplomats will go to a country once in their career, maybe twice at most. In addition to that, I’ve also served in Qatar, Iraq, Algeria, and Libya.”

Peach was already well versed in both the language and customs of Saudi Arabia when he became consul general in Jeddah, having worked in the Kingdom for many years. “I have spent more of my adult life in Saudi Arabia than I have in the UK. So, I guess I really do consider myself in many ways to be part of the fabric of Saudi society,” he said. “I’ve lived here through many changes, many experiences, and I’ve always found Saudi Arabia to be a very warm and welcoming place that I’ve very much enjoyed living in.” 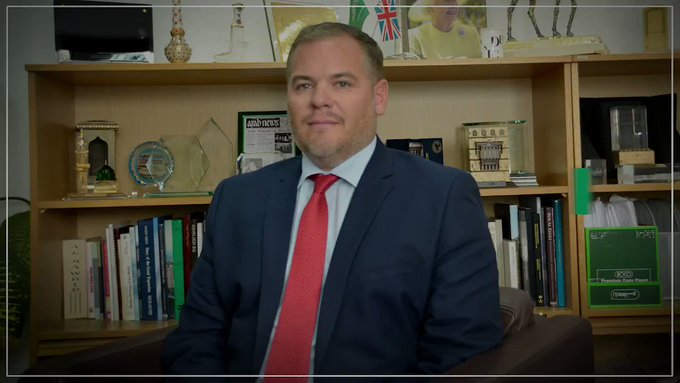 Peach cited the consulate’s coordination with Saudi authorities to provide British pilgrims with security and hospitality during their travels to Makkah as one of the highlights of his time in Jeddah.

“I would say one of the most important functions that our consulate has carried out has been our care toward British pilgrims. When I speak to my Saudi friends and colleagues, they are often surprised at just how many British Muslims visit Saudi Arabia each year. This past year, we’ve had around 130,000 pilgrims visit, including, most recently, 26,000 pilgrims for Hajj. As you know, for many people, this is one of the most important journeys of their lives, and we are ready to help them if — God forbid — they get into any trouble. We are very grateful to the Saudi authorities for the huge efforts that they make in facilitating the pilgrims with safety, security, and tranquility. Thankfully, the vast majority of visits have been trouble free.”

As consul general, Peach has witnessed first-hand the progressive reforms that the Kingdom is going through, and offers valid reason for optimism that the ambitious Vision 2030 project will be a success.

“An important role of the consul general is to promote trade between our two nations, and I’m delighted to say that over the past year we have increased mutual trade between businesses in Saudi Arabia and the UK. We’re expanding into new areas, so we’re mapping our work onto Vision 2030, following the creation of a Strategic Partnership Council as a result of the Crown Prince’s visit to the UK earlier this year,” he said.

“So, we’re looking for opportunities in new areas such as the creative sector, which we see Saudi Arabia is opening up to, not forgetting the more traditional areas where we have longstanding relationships — commerce and manufacturing.

“I’m hugely optimistic about the future of Saudi Arabia. It’s a country that has been blessed with many resources. The oil has been a blessing, the pilgrimage has been hosted here for centuries, and I know under Vision 2030 there are plans to significantly increase the number of pilgrims — which I’m sure will be very successful.” Peach also believes that the Kingdom’s tourism drive has great potential, describing it as “one of the most exciting things” about Vision 2030.

“I’ve lived in Saudi Arabia for over nine years, and I’ve been very fortunate to visit most of the country. It’s an amazing country from the mountains in the North, to the greener lusher mountains of the South, and world-class beaches along the Red Sea. I’m hugely optimistic that, in the future, tourists from around the world will get to experience the Kingdom that I’ve seen. Saudi Arabia has a very young population, and that means a very creative, dynamic population who want to change things and who want to work hard.”

While he may be leaving his official post in the Kingdom, Peach said the country’s natural beauty will certainly lure him back for frequent visits in the future.

“Jeddah will always be a special place for me,” he said. “It’s the first place where I’ve held the head post, and there are certainly unique responsibilities that go along with that. It’s been a very important place for my professional development, but also a place that I’ve been very much made to feel at home. I’ve found the people to be very open, friendly, warm and welcoming. I’ve built up many new friendships and partnerships and I’m sure those relationships will endure. In the years to come, I’m sure I’ll be a regular visitor to the Kingdom.

“Jeddah is perhaps the most familiar environment to me as I enjoy spending time at the beach, the Red Sea, and eating some great fish. Some of my more memorable experiences though, are from my time in Riyadh, from camping in the desert to eating some of the more interesting foods that we might not be so familiar with in the West. I will always miss my jareesh (a Saudi dish).

“Al-Ula in Mada’in Saleh is, without a doubt, one of the most spectacular places that I’ve ever visited — a mixture of beautiful natural landscape, desert mountains, and ancient civilization. When I’ve been there in the past, there were so few tourists, unlike — for example — the Nabatean ruins in Jordan, where you’re there with thousands of people. It was actually a really special experience to be at Al-Ula and almost completely alone. I also had the pleasure of organizing the visit of the Prince of Wales to Mada’in Saleh a few years ago, which was quite a unique experience.”

“A career in foreign service is a uniquely rewarding experience. It has given me the opportunity to travel to places I might not have otherwise visited,” he said.

“To have been able to travel and experience new cultures and languages, for me, has been the most rewarding part of my career in the foreign office. My advice to anybody who might enjoy that kind of lifestyle would be that a career in diplomacy is an excellent way forward.”

As Saudi Arabia and Great Britain usher in a new chapter of diplomacy, the departing consul general made sure to welcome his successor.

“I would like to wish him the very best of luck during his time as consul general. For me, he has one of the best jobs in foreign service. I hope that he will very much enjoy it. He’s arriving here at a very interesting time of change, and a change that the UK is very happy to be part of to help and support,” he said.

And finally, what’s next for the outgoing consul general? Peach kept it short and sweet. “A very long holiday,” he said with a laugh.