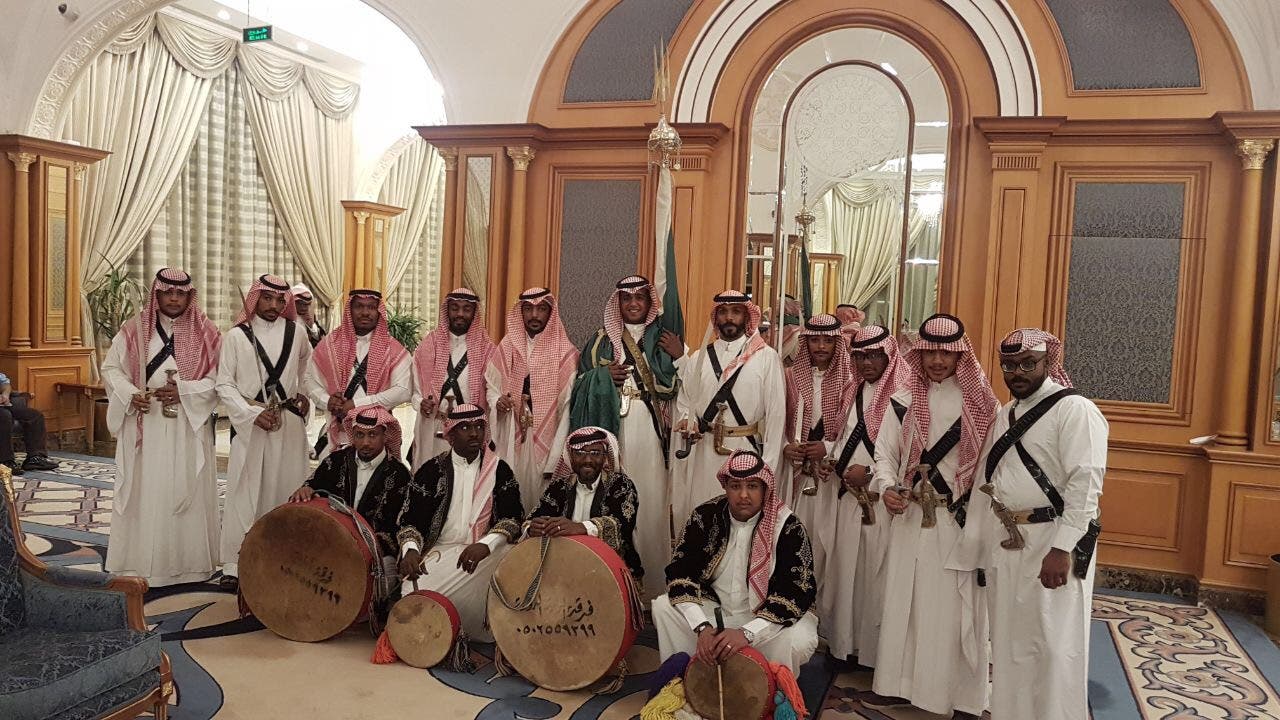 The eastern region residents in Saudi Arabia have a lot of folklore arts inherited within its historical heritage, receiving them from generations before them. The most prominent of which is the “Ardah al-Saifiya”, a folklore dance used in the past to encourage men before their battles during wars.

After victory, this art remained a way to express joy and celebration.

This show is related to several dancing teams, who represent this kind of art, including (Al Raiya Al Dawliya) show team, one of the oldest in the region.

The dance is performed in different national occasions as well as during social events like weddings. The eastern area folklore has different types; some of which were related with the land arts, which are the martial arts while others are linked with the sea which was a source of main income before the discovery of oil, and this was the maritime arts.

“Al Raiya” team is booming as one of the folklore dancing teams, which preserve the Saudi heritage, and highlights its presence in formal and popular events, the last of which was the Saudi cultural exhibition in Moscow, Russia.

Gawhar al-Dossary, the leader of the “Al Raiya” folklore dancing team, told Al Arabiya English that: “This is not a new team, but it has been there for years. We have enhanced it, whether regarding the presented shows, the instruments or the tools used in presenting the shows and the parties. This dancing team has been holding concerts inside and outside Saudi Arabia in the Gulf or European countries”.

Dossary said in a video to Al Arabiya English that the “Ardah al-Saifiya originated from the coastal people. It is called a maritime Ardah performed by the people who live in the kingdom’s seaside. It is concerned specifically with the coastal areas in Eastern Saudi Arabia, it has its own nature which has its impact on the citizens. It is performed in the religious occasions, national celebrations, festivals and weddings. Families in the coastal areas still perform this art in their occasions for its special impact on the public social life”.

How is the dance performed?

This folklore keeps the heritage in the memories of the children, and seeks to preserve its continuity. Drums are used while performing it, by hitting on it, there are people who hit on the tambourines in lines singing war songs, poems of pride and praise. While the performance is in two opposite rows, called the “al-Shayila”; opposite to a man who narrates a poem called “al-Shayial”, while others strike on the drums and tambourines, they are called “Al Edda men” where young and old men dance with joy while raising the swords and waving with it.”

Abdullah Hawsawi, one of the members of the dancing team, explains that this sword art has been performed for a long time, before exploring Oil. This art starts on the deck of the ship, as the singer, and others repeat the poems in a small circle on the ship. When the drums began, the ships in the harbor, starts raising the flags for the ship coming from the sea.

With the civilized and methodological development that took place in the Gulf and Saudi Arabia. The Sword art did not have its previous role, it became a nice folklore and heritage showing the customs and traditions in the grandfathers’ age. This art is performed by some folklore dancing teams, especially in weddings and national and formal occasions.

The words of these arts and folklore songs are derived directly from the popular memory, where every genuine art of the inhabitants of the coastal areas is inspired by the values, historical and social life of these people. Despite the dominance of the contemporary art forms, these folklore dancing teams still attracts different ages of Saudi audience, which confirms that it would remain present and inherited by generations.