Masato Ohtaka said the meeting between the Japanese prime minister and Saudi crown prince was the meeting was full of substance, and included discussion on the regional situation. (Arab News photo by Sa’ad Al-Dossary)

RIYADH: Japanese Prime Minister Shinzo Abe met Saudi Arabia’s king and crown prince on Sunday, to discuss the situation in the region, during the first leg of his Middle East tour.

The prime minister was received by King Salman in Riyadh as Abe visited the region in the hope of easing tensions between the US and Iran.

He later met with Crown Prince Mohammed bin Salman in AlUla, where they discussed regional developments, with prime minister Abe praising Saudi Arabia’s conduct during the recent heightening of tensions in the region.

“The meeting was full of substance,” said Masato Ohtaka, Japan’s foreign ministry director-general for press and public diplomacy, in a press briefing on Sunday. They exchanged views on the current situation and what needs to be done to defuse the tension, said Ohtaka. 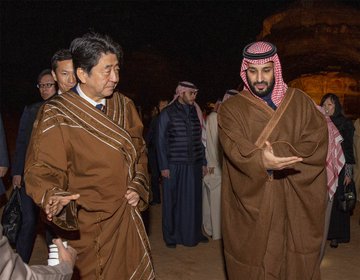 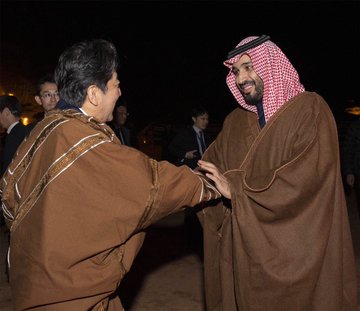 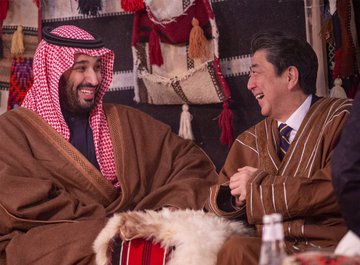 38 people are talking about this

During the meeting the prime minister told the crown prince that further escalation of the situation needs to be avoided and “he appreciates the fact that relevant countries such as Saudi Arabia are showing restraint”,  Ohtaka said.

“Abe mentioned that any military confrontation that might take place in the Middle east including Iran will have profound impact on the peace and stability of not only the region but also the world,” he added.

As for Japan’s mediation role with Iran, Ohtaka said, “This subject on Iran is extremely delicate. I hesitate to go into too much detail on this. We don’t necessarily characterize our efforts as mediation.” He underscored, however, that Japan is the only country in Asia that has been engaging on this issue.

The spokesman also highlighted how Japan can play a role, given the country’s close relationship with the US, and established ties with Iran.

“Japan is an ally of the USA, and also has a long-standing relationship with Iran, and based on those relationships has been engaged in playing a role in those contexts,” Ohtaka said.

Prime Minister Abe and Crown Prince Mohammed also discussed other bilateral issues, as the Japanese leader was received with traditional Saudi hospitality inside a Bedouin tent.

Their meeting, which lasted about an hour, included a 20 minute private discussion, said Ohtaka.

Prime Minister Abe said that he highly appreciated the reform efforts taking place within the Kingdom, and said the reforms were not only important for Saudi Arabia, but the region and ultimately the world as well.

Abe promised that Japan will fully support Prince Mohammed’s reform efforts through the Saudi-Japan vision 2030, a cooperation framework that has been around since 2016. The two nations are working on a broad range of areas and have already concluded four ministerial level meetings and identified 69 areas of cooperation.

112 people are talking about this

In their meeting in Riyadh, Abe and King Salman confirmed their cooperation toward the successes of the Group of 20 meetings to be hosted by Saudi Arabia this year and the Tokyo Olympics and Paralympics. In their 40-minute talk, the king expressed expectations that his country and Japan will deepen their strategic partnership in various fields, not only in the area of energy.

The day’s session was the fifth meeting between the two leaders since the start of Abe’s current administration in December 2012. At that time, King Salman was crown prince.

In his discussion with Crown Prince Mohammed, Abe said that Japan would support Saudi Arabia towards the success of the next G20 summit, which will be in Riyadh. The crown prince in turn pledged Saudi Arabia will follow up on the outcomes of the last G20 meeting in Osaka.

As the Japanese leader arrived in AlUla, his delegation were received by Prince Badr bin Abdullah bin Farhan, Minister of Culture and the Governor of the Royal Commission for AlUla.

AlUla, the last stop in Abe’s visit to the Kingdom before he continues his journey to the UAE and Oman, is full of archaeological treasures nestling amid beautiful desert landscapes.

Saudi Arabia’s move to open up Hegra city and the AlUla Valley is restoring a missing chapter in the history of the Arabian Peninsula and the entire world.

Bearing the name Mada’in Salih in the post- Islamic era, the lost city of Hegra was built by the Nabataeans, like its famous twin Petra in Jordan. They controlled the profitable trade routes that crossed the Arabian Peninsula from east to west and north to south from about the fourth century BC to 106 AD.

The Japanese Prime Minister Shinzo Abe’s tour of AlUla during his visit to Saudi Arabia casts a spotlight on the ancient Nabataean site as it prepares to open its doors to the public later this year.