Saudi women drivers took to the roads legally Sunday for the first time in the kingdom’s history, as its decades-old ban on women driving finally lifted.

The end of the controversial ban brings the ultra-conservative Gulf nation into line with the rest of the world. It also represents the culmination of years of campaigning by rights activists who have sometimes been arrested and imprisoned for their efforts.
More than 120,000 women applied for a driver’s license Sunday, according to senior Ministry of Interior and Traffic Directorate officials.
“Demand for obtaining driving licenses is very high,” said Maj. Gen. Mansour Al Turki, official spokesman of the Ministry of Interior.
Mona Al-Fares, a doctor, was in her car before midnight, waiting for the ban to lift before setting off through the streets of Jeddah with her husband and children.
“I feel like I’m surprised — am I really driving in my own country? I feel happy, relieved. I feel like I’m free,” she told CNN. 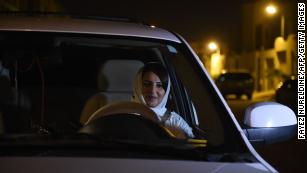 Live updates: Saudi women get behind wheel as driving ban ends
The step, first announced last September, will liberate many women from the constraints of needing to hire a male driver to travel even small distances, allowing many more to join the workforce, grow their own businesses and explore the kingdom.
Hiring women is a key part of Saudi Arabia’s ambitious plan to overhaul its economy, known as Vision 2030. The reform agenda is being spearheaded by Crown Prince Mohammed bin Salman.
For some, though, the jubilation at realizing a hard-won freedom Sunday will be tempered by the arrests last month of a number of Saudi rights activists, including some who have played a prominent role in the fight for women’s right to drive.
Many other restrictions on women’s everyday lives remain in place under the male guardianship system — including the right to marry, work or travel. 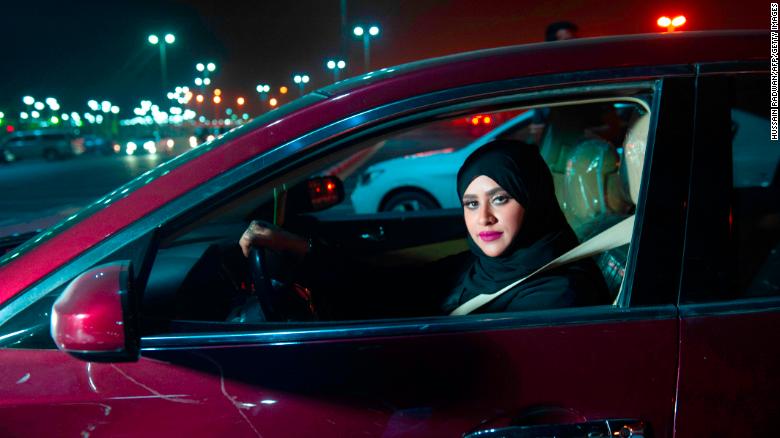 Saudi woman Sabika Habib drives her car through the streets of Khobar City on her way to Bahrain on Sunday.
Women and their families began posting photos and videos of them driving and celebrating as soon as the ban lifted.
In Riyadh, Aliah Naser watched as her mother, Romoush Bana, drove for the first time and posted an image of the moment to Instagram.
“My reaction: I was super excited about this change in Saudi and really hope that everyone can have fun and enjoy these changes in Saudi Arabia,” she told CNN. “She was scared a little but she did it in the end.”
Baheirah Khusheim, 33, described how just after midnight she followed a route her late father had taken her on as an 18-year-old girl, dressed in her brother’s clothing, “as he wanted me to have a real driving experience.”
“It is a remarkable historic moment that I wish all the world would be here to witness it,” she said.
Khusheim said she had picked up her Saudi license in Mecca. “The support from the community and officers was remarkable. As soon as you leave the license office, all you will hear is BEEP! BEEP! “MABROOK! CONGRATS!” from random strangers. It’s a thrilling experience.”
A spokesman for the Saudi Interior Ministry told a news conference that 120,000 women had applied for driving licenses in Saudi Arabia, according to state media Al-Ekhbariya TV.

Reema al-Bawardy, 28, took her 10 cousins on a drive across Jeddah at midnight as soon as the ban was lifted. They packed the big black SUV again on Sunday afternoon for another drive to an upscale coffee house in the Rawda neighborhood. Out of the 11 people in the vehicle, two had driving licenses.
The celebratory rides will go on for a few days, she told CNN. “After that they have to learn how to drive.” 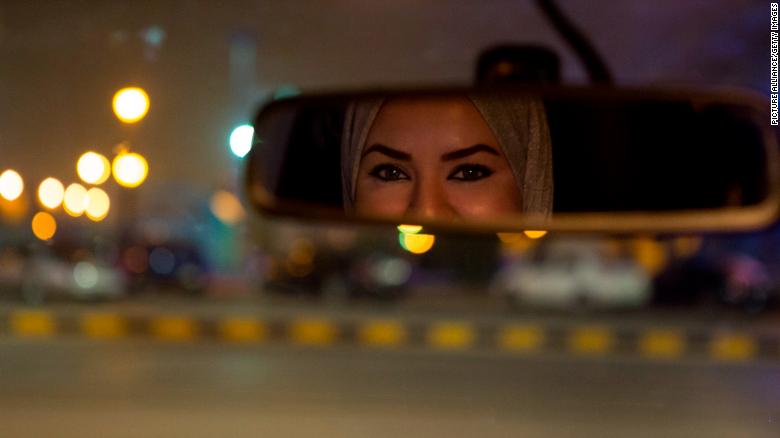 Walaa Abou Najem, 30, drives her car for the first time through the streets of Riyadh early Sunday.
Prince Alwaleed bin Talal, a billionaire businessman who was among the scores of high-profile Saudis detained for weeks last year in a luxury hotel in what the kingdom called an anti-corruption sweep, also hailed the end of the ban.
“Finally, first ride with my daughter @Reem_Alwaleed while she’s driving me and my grand daughters in Riyadh,” he tweeted.
Others were more skeptical about the much-touted advance.
“This is not an achievement,” one woman, who gave her name only as Yasmin, told CNN in Jeddah. “An achievement is something you worked and fought hard for, like being the first ambassador or minister or astronaut. That would be something worth celebrating.”
Her friend Batoul interjected. “At the end this doesn’t solve the problem. Public transportation does, and this is what would make the difference for the women who really need it.”

The kingdom had already issued its first driver’s licenses to a handful of Saudi women, in exchange for ones they acquired while overseas.
It also staged events last week in the cities of Riyadh, Dammam, Jeddah and Tabuk to raise awareness of road safety and traffic laws. Women who were new to driving could try out driving simulators and practice parking. 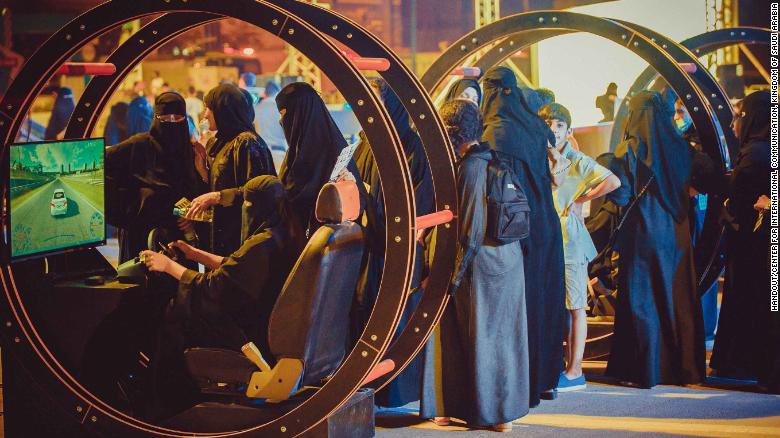 Women take part in a government-organized road safety event at Riyadh Park Mall, in the Saudi capital, on Thursday.
It may take some time, however, to change the attitudes of those opposed to the ban lifting.
“Women can’t drive and they are unqualified,” Khaled Abdullah Al-Houba, a 42-year-old state employee, told CNN on Saturday. He was sitting with his wife and children at the busy walkway overlooking the Red Sea in Jeddah.
“The society is not used to women driving,” he said. For him, the decision taken last September was implemented too soon. “Women need at least two years to learn driving,” he said, “so the women can be ready and society gets ready.”
He would consider allowing his daughters to apply for a license in the future, he said, but for now, “Saudi women still don’t have the guts needed to drive.”

Among the women’s rights advocates arrested last month were Loujain Al-Hathloul, who was previously detained for 73 days in 2014 after trying to drive from the United Arab Emirates to Saudi Arabia, and Aziza al-Yousef, 70, one of the country’s earliest activists for the right to drive. 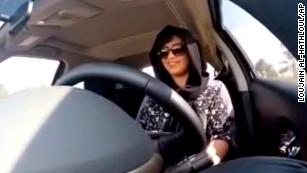 The women who campaigned to overturn Saudi Arabia’s driving ban
Both remain in custody, rights group Amnesty International said Thursday.
Those detained were accused of “suspicious contact with foreign entities,” according to a statement on Saudi Arabia’s official news agency.
Rights groups have condemned the crackdown and voiced fears that it could presage a closing down of Saudi civil society.
Saudi activist and author Manal al-Sharif, who was jailed in Saudi Arabia in 2011 after posting a video on YouTube of herself driving a car, tweeted Sunday that she was the first Saudi women to be given a ticket.
“The first Saudi traffic violation that was issued to a woman was actually for me for driving without a license on May 19th, 2011,” she said, adding that she paid 900 Riyals, or $240.

Twitter Ads info and privacy
Sharif told CNN last month that she had planned to visit the country from Australia, where she now lives, but had canceled the upcoming trip out of fear for her safety following the arrests of activists.
“We are back to square one,” she said. “We used to live in a police state; if you speak up you go to jail. And then there would be a defamation campaign against you, saying all sort of untrue things. Character assassination. We are seeing that same pattern again now.”
Sharif also told CNN that after Saudi authorities announced plans to allow women to drive, they called her and asked her not to speak to the media about it.

In Thursday’s statement, Amnesty International called for more reforms to follow the lifting of the driving ban — and for the detained women’s rights activists to be freed. 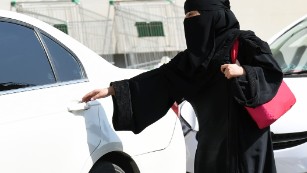 The ban on Saudi women driving is ending: Here’s what you need to know
“The lifting of the ban is testament to the bravery and determination of the women’s rights activists who have been campaigning on the issue since the 1990s, and the activists following up their groundbreaking work in subsequent campaigns since 2011,” said Samah Hadid, Amnesty International’s Middle East campaigns director.
“While we welcome the fact that women can finally get behind the wheel, we should not forget that many people are still behind bars for their work in fighting for women’s rights in Saudi Arabia.”
Human Rights Watch said Wednesday that two more women’s rights campaigners had been arrested in recent days “in what appears to be an unrelenting crackdown on the women’s rights movement.” It called for Saudi Arabia’s western allies to pressure the kingdom to release all the detained activists unconditionally before they are sent for trial.
Saudi Arabia follows a strict form of Wahhabi Islam that bans the mixing of sexes at public events and places numerous curbs on women. While there has been some loosening of restrictions in recent months, rights groups say much more remains to be done.

This article was first published in CNN