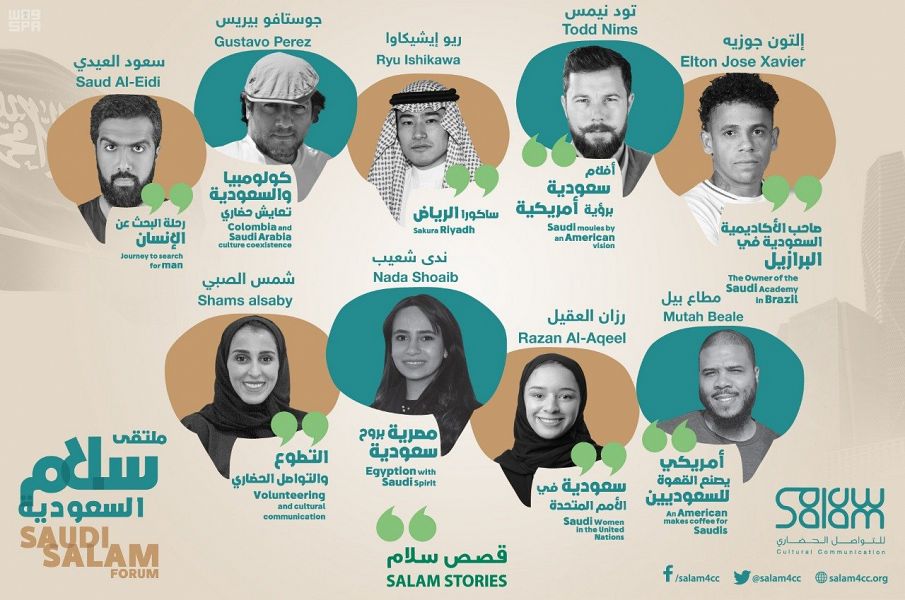 Saudi Peace Forum’s events will be held here on Sunday as well as Monday, as a showcase for presentations of experiences of young people from four continents in the world, displaying the most beautiful stages of their lives, full of affection, that they spent amidst the Kingdom, from the youngest until the dawn of their youth, in an open dialogue set to take place, at Saudi Press Agency (SPA) Conference Center, with participation of a number of people interested in the culture of the Kingdom, its heritage and history.

The dialogue is part of the “Stories of Peace” program, at the forum, which will host young people from Japan, Brazil, America and Colombia.

They will discuss, in a heart-to-heart dialogue, their lives stories in the Kingdom and how their coexistence with the Saudi people, good social treatment, including the Brazilian professional player of Al-Qadisiya Saudi club Elton Jose, who lives in the Kingdom for 10 years and established a football academy, in Brazil, under the name of “Saudi Arabia”.

Their counterparts from foreign countries will share their experiences, in various fields of life.

The exhibition includes art exhibitions that combine a diverse range of fine arts, graphics and caricatures, as well as photography using various materials and techniques, by a selection of artists from different schools.

The Forum, which is organized by the Peace Project for Cultural Dialogue, seeks to spread the true image of the Kingdom of Saudi Arabia, where its people meet on love as the capital of the Muslim community and the human and cultural values that elevate it to lead in its life. It also highlights the Kingdom’s efforts to support coexistence and cultural communication between peoples and respect for different cultures, as established by our country, since its establishment and calls for the vision of the Kingdom 2030, which stressed the need to spread the culture of coexistence and civic communication between different peoples and communities.

The forum aims at enhancing the spirit of mutual dialogue, stimulating exchange of experiences through dialogue and spreading the culture of peaceful coexistence among different cultures, and the principle of mutual respect among societies.

It is noteworthy that the project of peace of civilized communication was established in the year 2015, in order to enhance cultural communication and analysis of the reality of the stereotype image of the Kingdom, as well as bridging communication between the Saudi society and other communities, in accordance with the Vision of the Kingdom 2030, in cooperation with a number of competent institutions and bodies and follow-up of the National Committee on the Initiative of the Custodian of the Two Holy Mosques’ on dialogue between followers of religions and cultures.

The project produces quantitative and qualitative reports and indicators on the reality of the stereotype image of the Kingdom.