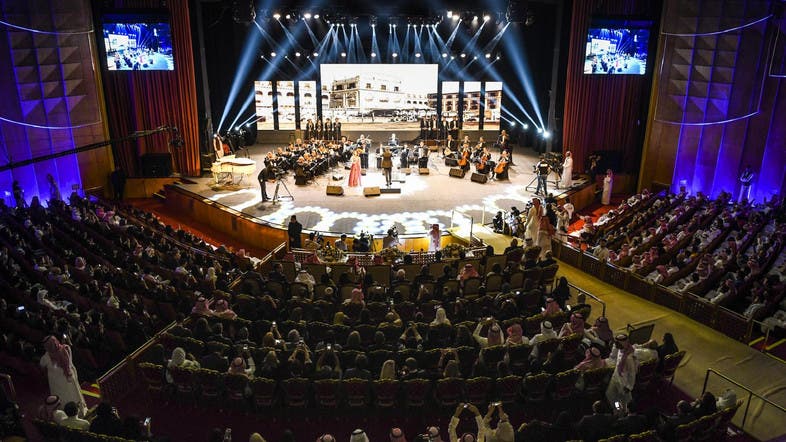 With a Western media establishment that devotes coverage to negative stories coming from Saudi Arabia, in many cases to score domestic political points, the cultural reforms taking place as a result of Saudi Vision 2030 are not being given their due weight.

To appreciate these reforms, one should read them against the backdrop of the Saudi Arabia of previous decades, especially the 1980s and 1990s when a group of Saudi writers and thinkers known as modernists (hadathis in Arabic) challenged literary and cultural norms. These figures imagined a new cultural self-image of their nation, only to be met with calls for their arrest and prosecution on charges of blasphemy and heresy. This was one of the most controversial episodes in Saudi cultural history.

Saudi Arabia’s Ministry of Foreign Affairs (MOFA) recently posted a tweet celebrating the legacy of a central figure of that episode, namely the poet Muhammad al-Thubayti, who was hailed as a pioneer of literary modernism in the Kingdom. The tweet was part of a series called Creative Saudis which MOFA updates every now and then to celebrate the works of Saudi writers, poets, and artists. 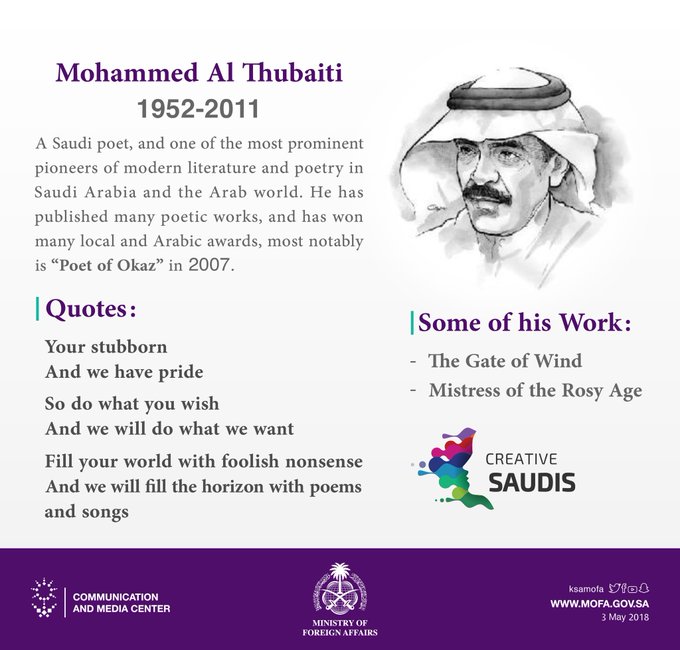 #CreativeSaudis | We are proud of the creativity of Mohammed Al Thubaiti. One of the pioneers of modern literature.

The tweet quotes a verse from the poet’s The Stance of the Sand/The Stance of Paronomasia (Arabic: Mawqif al-rimāl/Mawqif al-jinās), one of his longest and last poems (published in 2000). Prominent Saudi writers read the tweet as emblematic of the country’s new embrace of modern art and literature. The quote reads:

O palm tree:
The weak trees slander you
And the lowly tent-peg looks down on you
While you keep ascending in God’s space
With legendary pollen
And gracious patience

Such a high-profile celebration of a Saudi modernist was almost unthinkable in the context of 1980s Saudi Arabia, when al-Thubayti’s project was evolving. In fact, the entire Saudi modernist project was on the verge of collapsing towards the end of that decade due to the conservative Islamists’ vicious attack on the modernists, whom they deemed as sinners.

The 1980s wars over modernism

In the 1980s, “modernism” was a key word in the battles over symbolic capital between Saudi modernists and conservative Islamists. The modernists consisted of primarily two groups. The theorists and critics, such as Abdullah al-Ghadhdhami, aimed to import foreign modern literary theory to the Saudi cultural scene as well as establish a Saudi school of literary criticism. The poets and prose writers, on the other hand, provided the critics with materials on which to apply literary theory. Al-Thubayti was a central voice in the latter group.

In 1985, al-Ghadhdhami published his first book Sin and Atonement: From Structuralism to Deconstruction, which was hailed for its introduction of structuralism and deconstruction to an Arab readership. Almost one year later, al-Thubayti published his third collection titled Terrains (al-Taḍārīs). This period in general witnessed a profusion of literary publication along the same lines, all constituting a breakthrough in the Saudi intellectual discourse. However, not everybody was happy with the success the modernist movement was gaining.

In the second half of the decade, the conservative Islamists began accusing the modernists of “corrupting” the Arabic language, of Westernization, importing “atheistic” or anti-religious methods, and even treason against the state. The literary movement was seen as dangerous to the “cultural well-being” of the society, a threat to its traditions, and a “secret war” on the Islamic faith.

The backlash was spearheaded by the 1998 book Modernism on the Scales of Islam, which claimed that modernism constituted a deviation from the Islamic faith. In a shrewd tactical move, the book was prefaced with an endorsement by Sheikh Abd al-Aziz bin Baz, unofficial Grand Mufti of Saudi Arabia at the time. It bore the name of a certain Awad al-Qarni, an Islamist cleric of the Sahwa (Awakening), a dissident Salafi-inspired religious-political movement in Saudi Arabia that was influenced by the activism and conceptual framework of Muslim Brotherhood.

Three hadathis – al-Ghadhdhami, the critic and theorist Saʿid al-Surayhi, and al-Thubayti – faced the worst of attacks. Al-Ghadhdhami had to leave his post in the Department of Arabic Language and Literature at King Abdulaziz University in Jeddah. Al-Surayhi was stripped of his doctoral degree in 1989 because his dissertation included “ideas, expressions, and methods incompatible with the teachings and principles of our religion and our Muslim society,” according to an inquiry report.

As for al-Thubayti, he was prevented from accepting the 1989 Jeddah Literary Club Prize for poetry, which was awarded to him in recognition of Terrains, only an hour before he was set to receive it. The collection included expressions that the conservatives interpreted as transgressions of accepted religious and social norms. To make matters worse, Terrains was later banned from distribution.

Modernists were literally silenced by al-Qarni’s book. When Muhammad al-Ali, one of the godfathers of Saudi literary modernism, wanted to respond to al-Qarni’s accusations, no one dared to publish his response in the Saudi press. In the end, he had to publish it as a series of articles in the Kuwaiti daily al-Watan. Al-Ali’s response notwithstanding, the Sahwis and their condemnation of the modernist project prevailed.

Consequently, many hadathis chose to go underground. Being labeled as hadathi at that time amounted to something close to heretic, with all its serious repercussions. One might go as far as to say that the word hadathah (modernism) became increasingly taboo. In fact, the Ministry of Information issued a ministerial decree prohibiting the use of the word hadathah in all media outlets.

It was in this context, one in which religion in Saudi Arabia was re-interpreted to reflect a very strict understanding of Islam, that the hadathi project grew to devise a new way of defining Saudi identity.

The new Saudi Arabia.. of modernists

In the new Saudi Arabia, modernism’s spirit of redefining identity endures. Art is a cutting-edge industry, film is thriving and cinemas are open to the public, women are driving and attending concerts and sports events, modernist (and modern) literature is celebrated in events across the Kingdom, and, above all, culture has its own ministry which just launched its vision, mission, and initiatives to harness the nation’s rich heritage and promote culture as a way of life, a contributor to economic growth, and a bridge between Saudi Arabia and the rest of the world. The state’s backing of the conservative campaign against the modernists seems now part of a distant past.

An essential part of Vision 2030 is supporting cultural innovation to unlock the creative potential of the young population. Within this environment of openness to art and culture, creative Saudis are exploiting new mediums, such as film, and reviving traditional ones, such as storytelling. In this way, they are reclaiming their narrative from a simplistic and Orientalist image of the Kingdom.

The celebration of literary trailblazers such as al-Thubayti should invite us to note the ongoing shift in Saudi Arabia from banning to embracing modernism. His poetry was part of a course I taught last spring at Georgetown University in Washington D.C. on modern Arabic literature. Students loved The Stance of Paronomasia for its experimentation with poetry as a way of forging a new identity. This identity, while deeply rooted in the tradition of the place, is flexible enough to accommodate the innovations of modernity.

Literature and art provide people with a space for freedom of expression on matters social, political, and even spiritual, and they are important cites where a new imagining of nations’ self-images are forged. As for the Saudis of the new Saudi Arabia, they now seem determined to have the prophecy embedded in al-Ghadhdhami’s book Sin and Atonement fulfilled, by moving towards a future that celebrates tolerance and artistic expression. It seems as though Mohammed al-Thubayti, aka Sayyed al-biid (Chief of the Desert), were addressing them when he said:

O my friend,
Never grow weary of singing,
So long as you drink your fill from the pure spring,
Split with your boots the stagnant bond asunder!