JEDDAH: Saudi Arabia’s ambassador to the United States, Princess Reema bint Bandar, has met with President Donald Trump and presented her credentials as the Kingdom’s top diplomat in Washington.

“HRH Ambassador @rbalsaud met with @POTUS Donald J. Trump at the White House today to present her credentials as the new Ambassador of the Kingdom of #SaudiArabia to the United States,” the Saudi Embassy in Washington said early Tuesday. 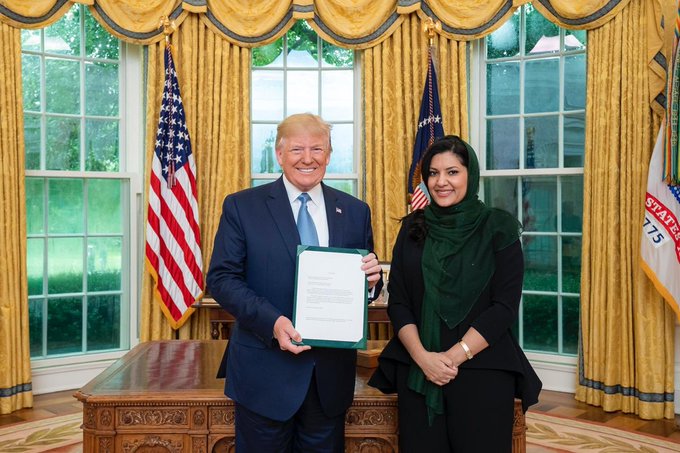 HRH Ambassador @rbalsaud met with @POTUS Donald J. Trump at the White House today to present her credentials as the new Ambassador of the Kingdom of #SaudiArabia to the United States.

“HRH stated that the Saudi-U.S. partnership is essential to the interests of both countries and expressed confidence that the two countries are capable of overcoming any challenges at the regional or global levels,” the embassy said.

The new ambassador also announced her meeting with the US president in a tweet.

“Presented credentials today at the White House. Conveyed the well wishes of Kingdom’s Leadership. Looking forward to working on strengthening and solidifying the historic Saudi – US partnership,” she said.

Princess Reema assumed her new office on July 4, more than two months after she was appointed to the key post, replacing Prince Khaled bin Salman, who is now the Kingdom’s deputy defense minister.

She was nominated to the post on February 23 and took her oath before King Salman in Riyadh in April, becoming Saudi Arabia’s first female ambassador and the 11th Saudi diplomatic representative to Washington.

Princess Reema is no stranger to the workings of diplomats, having spent several years in the US during her youth when her father, Prince Bandar bin Sultan, was Saudi Arabia’s ambassador to the country.

Before her diplomatic appointment, Princess Reema held various key positions in government as well as civic groups and private firms.

She held CEO positions for Al Hama LLC and Alfa International from 2005 and has launched her own handbag brand, Baraboux, in 2013. She also founded the private equity fund Reemiyah and co-founded Yibreen, a women’s day spa.

She is one of the founding members of the Zahra Breast Cancer Association in Riyadh and is also a member of The World Bank’s Advisory Council for the Women Entrepreneurs Finance Initiative.

She was also vice president of women’s affairs at the General Sports Authority since 2016 before her appointment as ambassador.