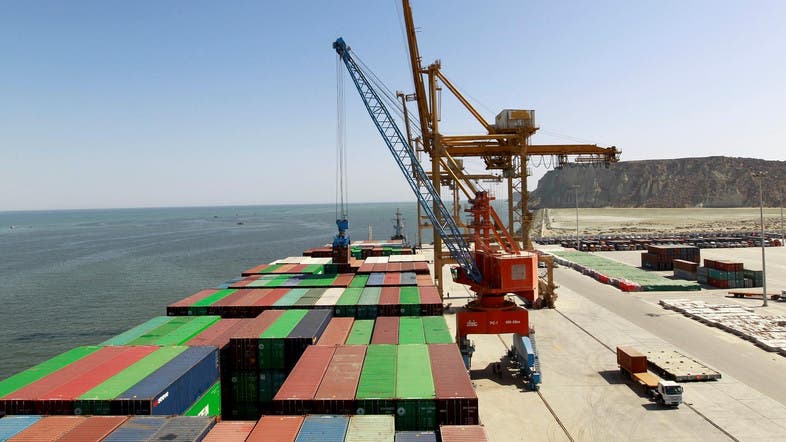 A container is loaded on to the Cosco Wellington, the first container ship to depart after the inauguration of the China Pakistan Economic Corridor port in Gwadar, Pakistan November 13, 2016. (Reuters)

Saudi Arabia on Wednesday agreed in principle to set up a major refinery at Gwadar and showed serious commitment to make investments in other areas of energy sector, Pakistani Dawn News quoted federal Minister for Petroleum Ghulam Sarwar Khan.

The minister said that the two sides had agreed to set up an oil refinery at Gwadar and a summary would be moved to the federal cabinet on Thursday (today) for approval to sign a memorandum of understanding (MoU).

He said the Saudi minister for energy was expected to visit Islamabad later this month for signing of the MoU. He said the visiting Saudi delegation was offered to participate in the $2bn North-South Gas Pipeline and bid for the upcoming 10 petroleum exploration blocks to be offered for auction soon.

The proposed 500,000 barrels per day refinery is estimated to be completed with an investment of about $8-9bn.

On the sidelines, Pakistan updated China about the progress on engagements with Saudi delegation.

An official said that Chinese Ambassador Yao Jing on Wednesday called on Minister for Planning and Development Makhdoom Khusro Bakhtiar who is also focal person on CPEC.

Mr Bakhtiar told the ambassador that development of refinery would be more important for Pakistan than Saudi Arabia because it would significantly reduce Islamabad’s oil import bill estimated for current year at $18bn. This would also ensure that Pakistan’s requirement for financial support from the International Monetary Fund is minimized.

In 2015, President Xi Jinping announced the China-Pakistan Economic Corridor (CPEC), a $60 billion initiative, which is part of his intercontinental BRI.

CPEC aims to expand China’s influence in Pakistan and across Central and South Asia.
It also includes plans to create road, rail and oil pipeline links to improve connectivity between China and the Middle East.

Previously the minister said that a third country can participate in the China-Pakistan Economic Corridor (CPEC) by taking part in the business and investment ventures arising out of the project, Bakhtiar said.