AL-ULA, Saudi Arabia: Saudi Arabia’s Crown Prince Mohammed bin Salman launched on Sunday mega tourism projects in Al-Ula, including a resort designed by a renowned French architect and a nature reserve, both called Sharaan.
Jean Nouvel, the French architect who designed Louvre Abu Dhabi, will build a resort in the mountains of Al-Ula as part of a plan launched on Sunday night to transform the home of ancient civilizations into a destination for visitors from around the world. 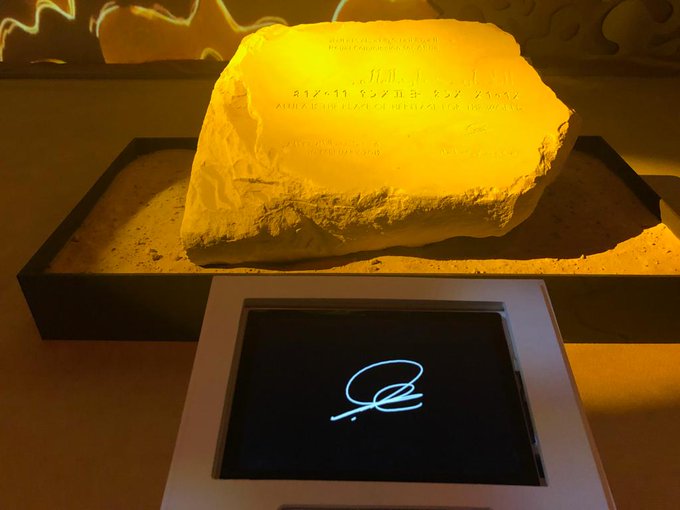 The plan for sustainable development of the region, which includes the Sharaan Resort inside a designated nature reserve, was launched by Crown Prince Mohammed bin Salman and the governor of the Royal Commission for Al-Ula, Prince Badr bin Abdullah bin Farhan, at a groundbreaking ceremony at the Maraya theater. The mirrored concert hall was built for the Winter at Tantora festival, which has brought visitors to the untouched area every weekend since December, giving them a taste of what’s to come.

“The decision to build in this place is brave and will allow Sharaan to be revealed on a world-wide scale,” Nouvel said during a presentation at the launch.

“This is just so beautiful, the desert and the sky at night, the stars… the natural beauty here is stunning,” Yanni told Arab News. “I have never experienced this type of beauty before in my life.” 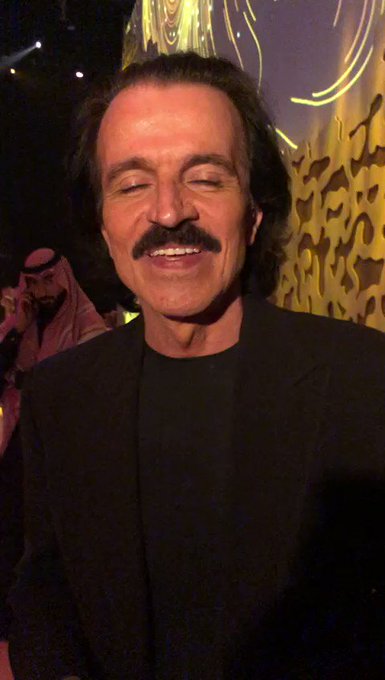 #LIVE: Greek composer @Yanni say he is delighted to be in the ancient city of #AlUla and see the natural beauty of the desert, which he described as a unique experience for a “Greek boy” #رؤية_العلاhttps://bit.ly/2BsQz5S

The charter for Al-Ula was presented on a stage made of sand, with a multimedia sound and light show involving local men and women, the “guardians” of Al-Ula. The rocks of Al-Ula, visible through glass at the back of the stage, served as a backdrop.

Al-Ula is home to spectacular sandstone rock formations and the archaeological site of Madain Saleh, the largest Nabatean settlement south of Petra that contains the ancient civilization’s rock tombs with their carved facades. In 2008, it was designated as Saudi Arabia’s first Unesco World Heritage site.

There are only so many architects in the world who have the power to draw visitors on the strength of the building alone, and Nouvel is one. Just ask anyone who has stood under Louvre Abu Dhabi’s 7,500-ton geometric canopy, inspired by a grove of palm trees and designed to cast dappled light onto the water and walkways below, in what he called the Rain of Light.

Nouvel’s architecture is rooted in the local context, and so with the Al-Ula resort, he will take inspiration from the surrounding rocks. “In the thickness of the rock, everything is possible, everything is stable and protected, as if weightless,” Nouvel explained. “Rock is an absolutely fantastic material because of its inertia. To put yourself in rock is to protect yourself. To protect yourself from extreme temperatures, to protect yourself security-wise. We’ve chosen to live in these rocks once more. To be able to frame the Sharaan landscape at different heights is amazing, discovering the distant horizons, discovering the different qualities of light, and all this in total thermal comfort.”

There is already a link between Nouvel and Al-Ula: A number of  ancient treasures from the area are now on display as part of the Roads of Arabia exhibit in Louvre Abu Dhabi. But the Sharaan Resort is a link that is even closer to home.

The resort will include residential estates, a summit center, a spa and restaurants. The full design will be completed by the end of this year; construction is expected to begin in early 2020, with a completion date of 2023.

The resort will be located in a valley deep inside the 925-square-kilometer Sharaan Nature Reserve. Both take their names from the surrounding canyon with its ancient rock formations. The reserve will conserve and restore the region’s natural desert habitats, including the Arabian leopard, with the help of local rangers trained by international experts. 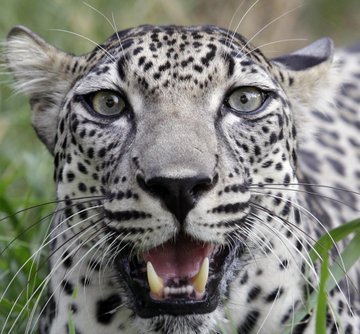 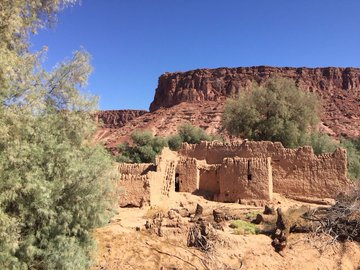 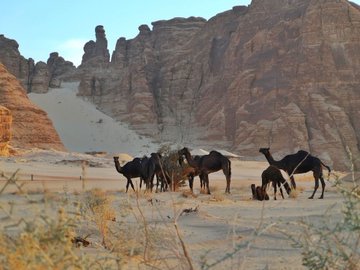 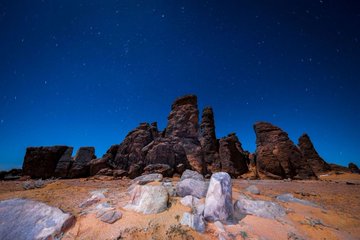 #LIVE: Royal Commission of #AlUla, through the launch of the World Fund for the Protection of the Arabian #Leopard, aims to be the largest of its kind in the worldhttps://bit.ly/2BsQz5S 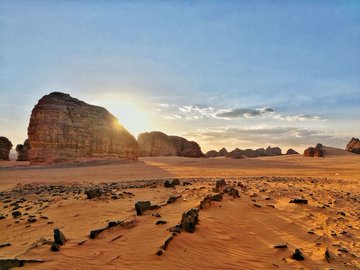 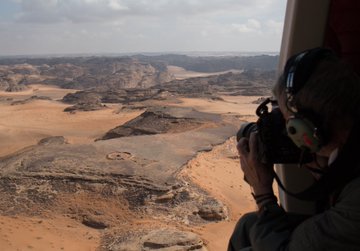 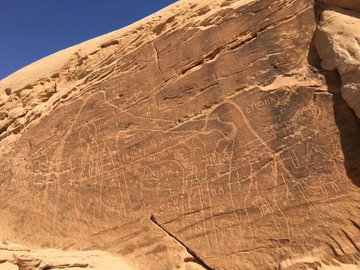 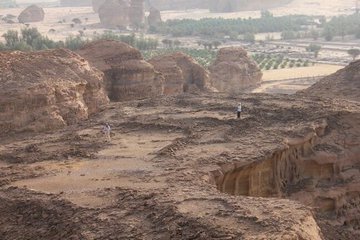 #LIVE: Royal Commission of #AlUla said the project will enable the #Sharaan Nature Reserve and other sites to be a suitable area for the future release and resettlement of the Arabian Leopardhttps://bit.ly/2BsQz5S

While the details of the plan are new, it is very much in keeping with the Crown Prince’s Vision 2030, which aims to develop the Kingdom’s tourism sector and provide the younger generation with the skills that they need for the future as it diversifies the economy away from its dependence on oil. The vision also pledges to  celebrate the country’s national identity by preserving its cultural sites, making them accessible and building world-class museums to “create a living witness to our ancient heritage.”

The Royal Commission for Al-Ula was created for this purpose in 2017, and the French Agency for Al-Ula Development was established last July, after Paris and Saudi Arabia signed a bilateral agreement during the Crown Prince’s visit in April last year.

The commission has already launched a scholarship program to train Saudi students in the US, the UK and France in the fields of tourism and archaeology; this year, it will add architecture and environmental planning to the mix. The Hammayah program will also provide up to 2,500 opportunities for local men and women to get involved in a community effort to preserve the wonders of Al-Ula.
There are only so many architects in the world who have the power to draw visitors on the strength of the building alone, and Nouvel is one. Just ask anyone who has stood under Louvre Abu Dhabi’s 7,500-ton geometric canopy, inspired by a grove of palm trees and designed to cast dappled light onto the water and walkways below, in what he called the Rain of Light.

The project is all about “locals, locals, locals,” Rami Al-Sakran, capabilities development manager for the commission, who is leading the Al-Ula scholarship program, told Arab News. “Without the locals, we can’t succeed.” 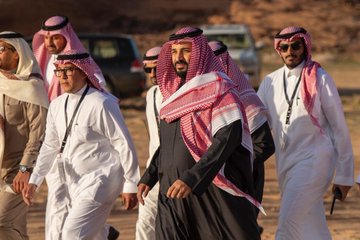 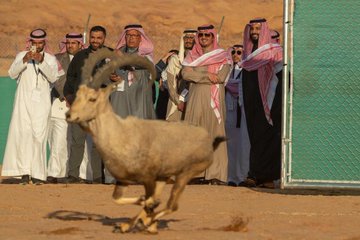 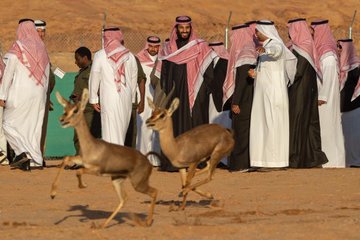 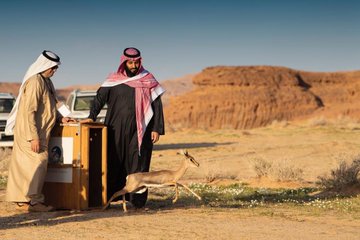 #LIVE: #SaudiArabia‘s Crown Prince #MohammedBinSalman has just launched a vision for #AlUla that includes a #resort designed by French architect #JeanNouvel and a nature reserve, both called #Sharaan #رؤية_العلاhttps://bit.ly/2BsQz5S