The world’s number four chemical firm bought a 24.9 percent stake in Clariant this year and is expected to intensify research and development with the Swiss specialty chemicals maker as well as hike its stake over time, the sources said.

It already has a New Jersey-based partnership with Clariant that licenses chemical process technology to customers including Huntsman (HUN.N) and Akzo Nobel (AKZO.AS).

“SABIC’s narrative is clearly not to stay at 25 percent and do nothing,” a person close to the matter said, adding that a combination of businesses would precede any potential merger.

In January SABIC said it had no current plans to launch a full takeover of Clariant.

However, the Riyadh-based group wants to extract value from its investment in a friendly manner, the sources said, adding that it does not want to be perceived as an aggressive acquirer and any attempt to hike its stake may take time.

SABIC declined to comment, while a spokesman for Clariant said it was in ongoing talks with SABIC about “possible future collaboration prospects” and any outcome would be communicated at the appropriate time.

FILE PHOTO: A woman stands next to a logo of Swiss specialty chemicals company Clariant ahead of a news conference to present the company’s full-year results, in Zurich, Switzerland, February 14, 2018. REUTERS/Moritz Hager/File Photo

Middle Eastern firms have been eager to expand into advanced downstream chemicals operations like the catalysts that Clariant produces to help speed up processes at chemicals plants.

The moves show that Saudi companies are increasingly trying to raise their influence outside the kingdom as part of the ambitious Vision 2030 plan which was set out by Crown Prince Mohammed bin Salman to diversify the country’s economy from oil. 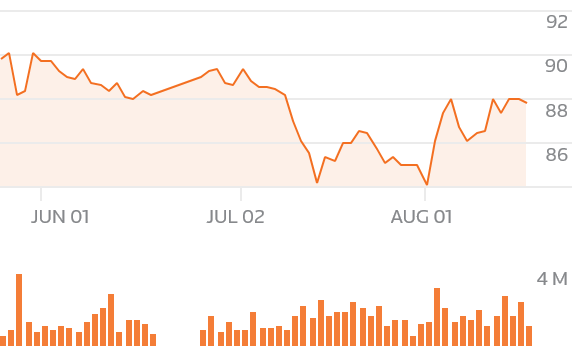 SABIC, which is 70 percent owned by Saudi Arabia’s Public Investment Fund sovereign wealth fund, would initially stop short of taking control of Clariant which has a market value of $7.8 billion, the sources said.

Under Swiss takeover rules anybody with 33.3 percent of the shares would have to make an offer for the full company.

While SABIC’s purchase of a stake in Clariant ended the Swiss firm’s fight with activist investors, it must be vetted by regulators in countries including Brazil, Germany and Austria.

The sources said the deal would be cleared during the summer and would pave the way to the implementation of closer ties.

Clariant’s boss Hariolf Kottmann told investors in March that management viewed SABIC’s commitment as “very positive” and a strategic update would be provided in September.

Plastics production is an area where SABIC may implement closer ties with Clariant, two of the sources said.

SABIC has a strong plastics business since its $11.6 billion purchase of GE Plastics in 2007 and a combination with Clariant’s would make sense, one of the sources said.

Although the division’s revenue grew by 5 percent last year, producing much of Clariant’s cash flow, its profitability trails that of divisions like catalysts and care chemicals, which include soap and shampoo ingredients.

This article was first published in Reuters