Marwaai was given the award in recognition of her efforts to popularize yoga in Saudi Arabia and getting it recognized as a sports activity. The event, which was held at the president’s house in the capital, was attended by Prime Minister Narendra Modi who recognized Marwaai’s efforts.

“You are a great yoga teacher to popularize yoga in Saudi Arabia and work to get it legalized as a sport, great!” he said.

The president of the Arab Yoga Foundation told Saudi Gazette that this was two years in the making, and that she could not have done it without the support of Princess Reema bint Bandar who heads the Saudi Federation for Community Sports and is the vice president for development and planning at the Saudi Arabian General Sports Authority.

“It is indeed a great honor, and I am thankful for the recognition of my two decades of work in promoting yoga in the Arab world and Saudi Arabia,” she said. 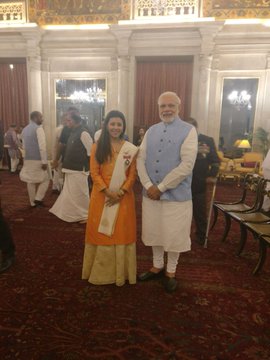 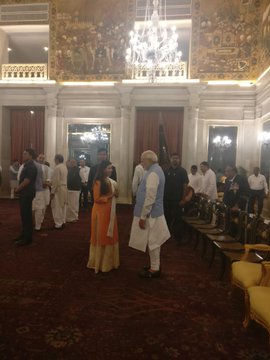 An honour and privilege to meet Hon PM @narendramodi ji Your efforts to recognise #Yoga as a gift to all humanity transformed the present & future of yoga around the world. I’m proud to be an admirer of Shri Modi and HRH #MohammedbinSalman #mbs who inspires youth in #SaudiArabia

“In February 2017 when I met Princess Reema to request her support in legalizing and systemizing yoga activities, the most beautiful thing was her positivity, her encouraging words and assurance. She listened to all my thoughts, worries and ideas patiently and always encouraged me,” Marwaai added.

“She gave me a great hope that no matter how long it takes to finalize all the rules, she is there for every Saudi women and athlete. She always showed interest in my achievements. I would like to say if it wasn’t Princess Reema it wouldn’t have happened and we wouldn’t have yoga listed as a sport today in Saudi Arabia.”

The Saudi ministry of commerce and investment had recognized yoga as a sport in November of 2017.

Nouf’s efforts supported by Princess Reema paid dividends so much so that today there are approximately 500 yoga instructors — a majority of them women — in Saudi Arabia.

“Now yoga is really known to Saudis unlike 14 years ago when I started teaching and talking about yoga publicly in 2004 in many media channels, radio, magazines and newspapers,” she said.

Marwaai added that she is happy to be “living the real change” under Crown Prince Mohammed bin Salman. “I am more motivated than ever to be a productive and a proud Saudi woman. Many other women and youth are so inspired by Crown Prince Mohammed’s words, promises and motivational quotes. I am looking forward to serve my society and be an active part of the changes taking place in my country. I am sure many other women in many fields and sectors are so motivated and hopeful as well.”