Saudi Arabia easing restrictions on women driving, finally allowing almost half its population to get behind the wheel, is not only landmark moment in a society where gender roles have long been rigidly demarcated, but has huge implications for women’s ability to work.

“For women, the Saudi job market is one of the toughest in the world,” says Khalid Al Khudair, founder of Glowork, a startup that’s been at the forefront to boost women participation in Saudi workforce. “But the driving decree will create hundreds of thousands of jobs for women especially in the retail sector, which has over 450,000 jobs, as the cost of transportation allowances will drop.”

Allowing women to drive is the latest in a series of changes in Saudi Arabia, which has an ambitious plan to transform the economy by 2030 and, in line with that goal, increase the number of women in the workforce — from 22% to 30% over the next 15 years.

Unsurprisingly, Saudi Arabia has the largest gender imbalance in labor force participation among G20 countries. Only 1.9 million of its 13.1 million women participate in the workforce — a labor participation rate of 20.2% — compared with 77.8% for men, according to G20 Labor Market Report 2016. The unemployment rate among women is 32.8%. The country ranked 141/144 for gender equality in the World Economic Forum’s 2016 Global Gender Gap report.

Many of them have yet to join the labor force, despite being highly educated and motivated. Last year, 105,494 women graduated from Saudi universities compared with 98,210 men. 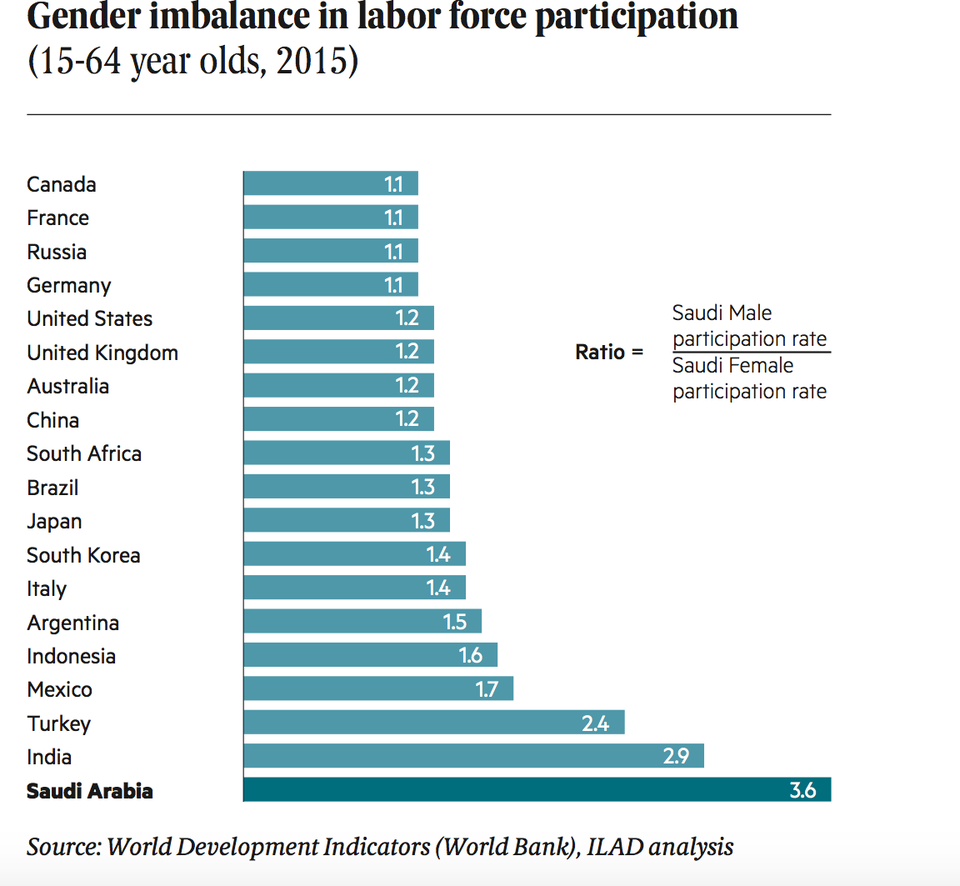 The problems female jobseekers face is largely the result of the country’s conservative culture. Apart from driving ban, many social and workplaces are segregated and companies often have a cultural resistance to hiring them.

Founded in 2011, Glowork has put over 33,000 women in the workplace, and has assisted over 300,000 more. “On average, we place 28 women a day into the private sector,” says Al Khudair. Every year, it also organizes a career fair attracting over 25,000 female jobseekers. Last year, 3,600 women were hired at the career fair.

In addition to matching women jobseekers with employers, Glowork has pioneered a “virtual office solution” that makes it possible for women to work from home.  “Due to gender segregation, many SMEs cannot hire women as that would mean extra cost for separate office space, rent, utilities and furniture,” Al Khudair explains. “The cost-effective virtual office solution enables women to work from home and the companies that hire them can easily monitor their work. This solution works best for women in rural areas and those with special needs and disabilities,” he adds. For this initiative, the startup won awards from International Labor Organization and World Bank.

Saudi Arabia’s untapped human resource also cost the world’s largest oil producer billions per year, as the Ministry of Labor gives jobseekers an allowance of around $6,000 a year. To reduce the cost of the government, Glowork acquired the Ministry’s database of unemployed women, and now earns a commission every time it finds a job for one of those registered women. “Since we filter and screen candidates, mentor and interview them, and find employers looking to hire women, the government, instead of paying the jobseekers, pay us in installments — $200 upon hire of a new candidate, $200 on completion of three months at work, $150 after six months and $150 after a year,” says Al Khudair. “This saves the government money.”

These efforts have led to progress in the last few years. Now, women cloaked in black, some with only their eyes showing through face veils, are working in shops, offices and boardrooms. “Every other day, new sectors such as aviation and airports, hospitality and food courts in malls are opening up for women,” says Al Khudair. “Five years ago only 46,000 women were in the private sector, today over 600,000 women are employed in the private sector.”

There has also been some easing of restrictions on women’s ability to work in the fields of law and education. Additionally, Saudi Aramco, the state oil company, plans to raise the share of women in the workforce from 25% to 40%.

“The country is changing — albeit slowly — towards gender equality,” says Al Khudair. Earlier, this year, Sarah Al Suhaimi became the first female chairperson of Saudi Arabia’s stock exchange, the largest bourse in the Middle East, and Rania Mahmoud Nashar was appointed the chief executive of Samba Financial Group, one of the country’s largest national banks.

“The key is not just placing women in the workplace, but empowering them to leadership positions in various sectors,” adds Al Khudair.