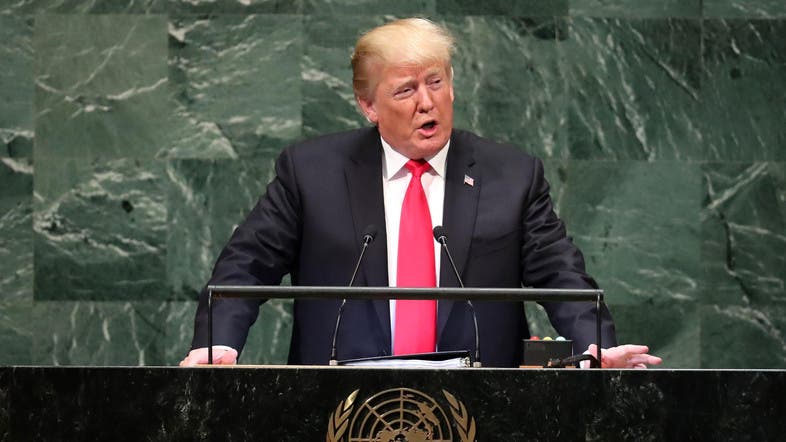 Trump added that the US is working with Gulf nations, Jordan and Egypt to set up a regional strategic alliance. (Reuters)

Trump added that the US is working with Gulf nations, Jordan and Egypt to set up a regional strategic alliance.

“Following my trip to Saudi Arabia, the Gulf countries opened a new center to target terrorist financing. They are enforcing new sanctions, working with us to identify and track terrorist networks and taking more responsibility for fighting terrorism and extremism in their own region,” Trump told the crowd of world leaders.

“The United States is working with the Gulf Cooperation Council, Jordan, and Egypt to establish a strategic alliance so Middle Eastern nations can advance security and stability across their home region,” he added.

Trump also said that foreign aid would now only be given to “friends” from now on.

“Moving forward we are only going to give foreign aid to those who respect us and frankly our — our friends. And we expect other countries to pay their fair share for the cost of their defense.”

Trump also blasted Iran as a “corrupt dictatorship” that is plundering its people to pay for aggression abroad, using his speech to the United Nations General Assembly to threaten more sanctions against Tehran.

“Iran’s leaders sow chaos, death and destruction,” Trump told the annual gathering. “They do not respect their neighbors or borders or the sovereign rights of nations.”

Trump’s speech in the green-marbled UN hall, while relatively low key, was aimed at Iran, which the United States accuses of harboring nuclear ambitions and fomenting instability in the Middle East through its support for militant groups in Syria, Lebanon and Yemen.

Trump compared US relations with Iran to what he called improved ties with North Korean leader Kim Jong Un, who Trump had met in Singapore in June as part of a still-unfulfilled drive to get Pyongyang to give up its nuclear weapons.

In his address last year to the UN, Trump insulted Kim as a “rocket man” bent on nuclear destruction. On Tuesday, Trump praised Kim for halting nuclear and missile tests, releasing Americans held prisoner and returning some remains of US soldiers killed in the 1950s Korean War.