JEDDAH: A video of a man in his late twenties/early thirties slapping a cleaner in a park went viral on Twitter on Wednesday, creating an uproar in its wake.

People sympathized with the worker and condemned the young man’s behavior as dehumanizing and abusive, requesting that the authorities take measures against the assailant.

@Sul6an_0_ said: “There is no excuse for his actions and nothing gives him the right to attack the worker … All workers can be reported in case they neglect their work — and if they’ve committed a criminal act the assailant should’ve just called 999. Attacking a simple worker is no sign of manhood or bravery but weakness and meanness and the lack of humanity.”

“Only a mean and despicable person would stretch his hand to a poor man!!! If for example, the cleaning worker made a mistake you aren’t the one to punish him. He works for the government, and this man’s act is overstepping the government — I hope they catch him and teach him not to hurt others ever again,” tweeted @Abody456.

@Jdeed2002 said: “No one is satisfied with what this young man has done. The country has a government to tackle any shortcomings. We do not live in the jungle.” 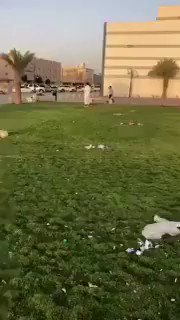