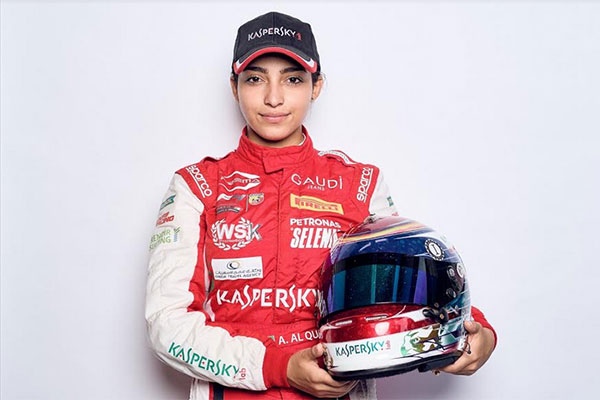 An unprecedented number of women are to compete against male counterparts in Formula E’s hotly contested ‘Rookie Test’ for up and coming drivers being staged in Saudi Arabia the day after the inaugural Saudia Ad Diriyah E-Prix.

On December 16, following Formula E’s first race in the Middle East at the stunning Unseco heritage site of Ad Diriyah on December 15, female drivers will line up against male rivals on the grid to take part in the official in-season test for the forthcoming season of the FIA ABB Formula E Championship.

The ‘Rookie Test’ has seen the local promoter work with teams to encourage more female participation – with the results being one of the most exciting, diverse and competitive line-ups seen in motor sport.

The list consists of a varied group of up-and-coming talent along with well-known faces, including the first Emirati female racing driver, the youngest winner of the British GT Championship, a former Andretti Formula E driver and a member of the FIA’s Women in Motorsport commission.

Amna Al Qubaisi, will be competing in the test with Envision Virgin Racing. The UAE-born driver has had a steep progression in her career so far, starting karting aged 13, and going on to win the UAE Rotax Max Challenge Championship before more recently competing in Formula 4 with Prema Theodore Racing.

Al Qubaisi said: “I’m very proud to be representing women in general and Arabian women in particular. This test drive is another stepping-stone towards my dream of a professional career in motorsports and thanks to the continuous support of Kaspersky Lab, this dream will eventually come true.”

Princess Haifa bint Mohammed bin Saud Al Saud, secretary general of the organizing committee for the race, said: “Through the increased participation in and hosting of world-class sports within Vision 2030, we want to inspire the young people of Saudi Arabia towards greater achievement and taking an active role in every part of life.

“In this light Formula E is a natural fit for the future that we are trying to create for young people in so many ways, such as renewable energy and diversifying for economy. It is also a platform for women to show their skills and we are delighted to host a landmark occasion for Formula E and global motorsport.”

The DS Techeetah team has recruited Tatiana Calderon to get behind the DS E-Tense FE19 for the first time on track on December 16. The Colombian is no stranger to single-seater racing, having competed in the FIA European Formula 3 Championship, before taking the jump to GP3 in 2016. Her current role is as official test driver for the Alfa Romeo Sauber.

“When the promoter approached us about the opportunity to offer a test session to a talented female racing driver at the first in-season test, we jumped at the opportunity. We immediately started thinking about drivers that would be suitable for the test, and Tatiana was on top of our list. She’s incredibly talented and we think she’ll do a stellar job at the test with the experience she is able to bring,” said DS Techeetah team principal, Mark Preston.

Swiss racer Simona de Silvestro, who previously competed in the FIA ABB Formula E Championship’s first two seasons and today races in Australia’s Supercars Championship, will drive with the Venturi team in a new Venturi VFE05. Spanish driver Carmen Jordá spent two seasons in Formula 1 as a development driver and will drive with the Nissan e.dams team in Saudi Arabia in a Nissan IM01.

Meanwhile, British racer Katherine Legge, a Jaguar I-Pace eTrophy driver and who has impressed regulars in Nascar during 2018, will drive with Mahindra Racing in a Mahindra M5Electro on her first outing in a Formula E car since 2015.

Dilbagh Gill, team principal of Mahindra Racing, said: “Mahindra Racing is delighted to be taking part in the first 2018/19 ABB FIA Formula E in-season test in Ad Diriyah. We have worked closely with the local promoter of the Saudia Ad Diriyah E-Prix, who are aiming to encourage more female participation, and we are thrilled to be able to field one of the strongest female drivers in the sport in this test, alongside our regular Season Five driver Jerome d’Ambrosio.”
Finally, BMW junior driver Beitske Visser will link-up with BMW i Andretti Motorsport team.

Both HWA Racelab and Geox Dragon are still working to secure female drivers to take part in the test as part of their respective teams.

All drivers will be getting their first taste of Formula E’s second generation of racing technology, which has created cars that can complete the 45-minute races on a single charge while sprinting from 0-100 km/h in 2.8 seconds and hitting 285 km/h.

The Saudia Ad Diriyah E-Prix will be the first time that these cars have ever competed in the world’s premier electric racing category, adding extra significance to the Rookie Test at a time when driver feedback is imperative to the development of their championship challenge.

The closed test will run over two sessions across the day of Saturday 16 December, with each driver allowed one new set of tyres and a used set of tyres for their track sessions. This will follow a three-day festival of world-class motorsport and live family-friendly entertainment including superstars from the global and regional music industry.

Carlo Boutagy, head of CBX and the promoter of the event, added: “Bringing Formula E to Saudi Arabia is a fantastic moment for the culture and community of the Kingdom that is evolving through Vision 2030. Formula E and the teams have taken a remarkable step to put women drivers into such an important test and given them a genuine showcase for their talents at the pinnacle of the electric sport alongside the biggest names in the series.”

The ‘Saudia Ad Diriyah E-Prix’ is the first in a 10-year partnership between ABB FIA Formula E and the General Sports Authority of Saudi Arabia (GSA) and the Saudi Arabian Motor Federation (SAMF).

This article was first published in Arabian Business Community